Serial trickster auntie caught on video twice: Latest video shows how she 'drops' $50 note and walks away with free change and fish 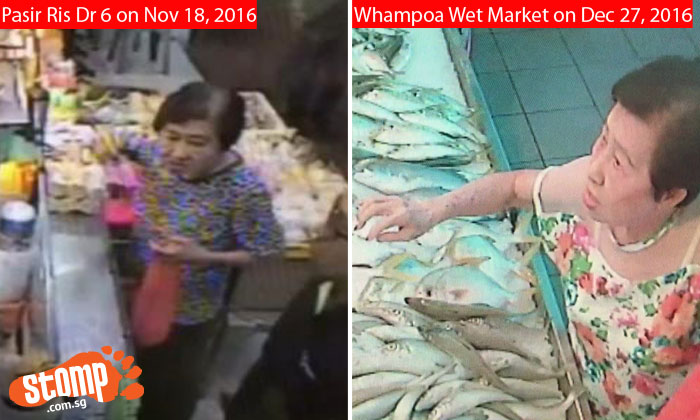 An elderly lady who has a history of scamming shopkeepers by pretending to drop change and telling them that the change is short, has struck again at Whampoa Wet Market.

Stomper Christine had alerted Stomp to a previous incident that happened at Pasir Ris Drive 6 on Nov 18, 2016 when the auntie claimed she dropped money near the register and said she was short of $10.

Christine informed Stomp that her friend who worked at a coffeeshop in Paya Lebar was conned by her too.

This time, Stomper Yeowhwa sent Stomp video footage of the woman in action at his fish stall at Whampoa Wet Market on Dec 27, 2016.

In the video, the woman waves a $50 note at the shopkeeper gesturing at a fish she wants to buy.

She then pockets the $50 note while the worker proceeds to pack her fish.

When he hands over the fish, there is some confusion as she claims that she has already paid for it and pretends to look around the stall for the money.

After some hesitation and confusion, the worker goes to the cash box and hands over about $40 in change to the woman.

Yeowhwa did not know about the incident till his employee told him and he decided to review the footage.

He then decided to send the video to Stomp after seeing Stomp's previous report.

However, he said he did not make a police report.

He wanted to alert other shopkeepers to the woman's tactics so that they do not fall for the same trick.

Watch the video of the incident at Whampoa Wet Market below.

Watch the video of the incident at Pasir Ris Drive 6 below.

Related Stories
Man who acted to be in love with cleaner and cheated her out of $57,000 gets 20 months' jail
If Singaporeans think it's cheaper to repair their vehicles in Malaysia, read this story
Housewife dupes 18 doctors into giving her cough syrup by impersonating other women
scam
con
woman pockets change