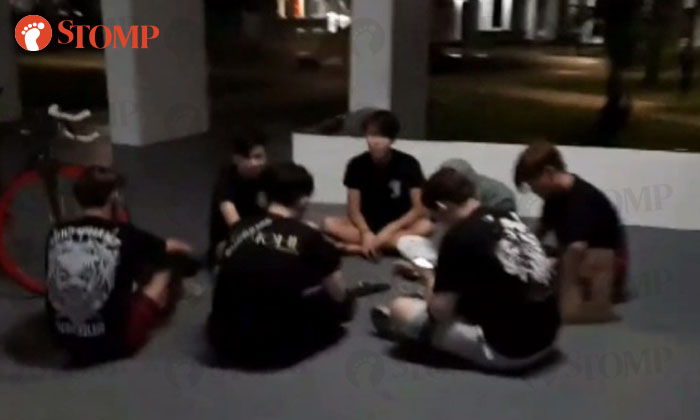 Stomper Ms Teng has been frustrated by youths repeatedly blasting music and hanging out at the void deck of Block 763 Choa Chu Kang North 5.

She captured one of the instances on camera on Oct 1 at midnight.

In the video, a large group of boys is seen seated in a circle on the floor of the void deck.

Music is blasting in the background throughout the video.

As she leaves the first group, someone can be heard yelling in the background: "Aunty what happened?"

Ms Teng then approaches another group that disperses when she comes closer.

They can be heard shouting expletives at each other.

When asked how she felt about them using vulgarities, she said: "I felt that it was ridiculous and rude for them to do this kind of thing."

She also said: "My mother and I went downstairs at about 12am that day to take a video of the group of teenagers.

"They were very noisy and it is not the first time this has happened."

Ms Teng explains that she lives near a secondary school and that many teenagers would hang out in the vicinity of the block.

She said: "It's ok if they just are sitting down and talking. But they blast their music loudly and smoke in the area at night.

"It is so disturbing that we even made a police report because of all the smoke.

"We live on one of the lower floors and the smell of the smoke is very strong."

In response to a Stomp query, the police confirmed that a report was lodged on Nov 25, almost a month after the video was taken.

The Stomper added the same groups of teenagers would hang out at the void deck at different times throughout the day.