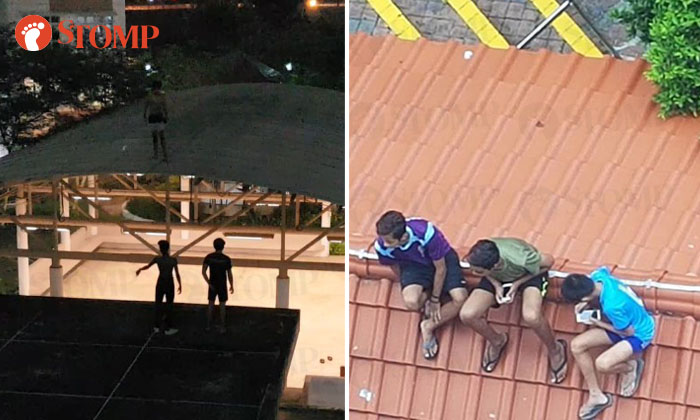 Youths were seen sitting on a roof of a sheltered walkway in Telok Blangah and Yishun on Oct 24 in two separate incidents.

Along Telok Blangah Drive, a group of three boys were spotted sitting side by side on the roof at about 3pm.

Stomper Zee,  who was visiting her parents in a block overlooking the roof, captured the incident and sent it to Stomp.

She said: "It is unsafe for the kids to be hanging out there.

It was not only dangerous for them, but for passers-by who walked under as well.

The shelter is not meant to be sat on and I was concerned that it would have been unable to withstand their weight."

It is the first time Zee has seen this happen.

In the other incident at Block 342D Yishun Ring Road, Stomper J saw three boys on the roof of a multi-purpose hall at about 8pm.

He was hanging out his clothes in his flat, overlooking the multi-purpose hall, and saw three boys climbing and walking around.

He said that he called the police immediately while he recorded a video of them.

In one of the two videos, a boy scaled the peak of the hall's roof.

He walked around before climbing down again.

The three of them talked to a boy sitting in the multipurpose hall, who appeared to be their friend.

At the end of the video, the boys left the roof to sit in the hall.

In the second video, the police, that Stomper J had called, arrived.

Four officers spoke to the boys.

According to Stomper J, they were advising the boys not to scale the roof because it is dangerous.

Stomper J said awhile after the officers left, the boys left too.

Related Stories
Stomper worries about elderly woman's safety after seeing her sweeping roof of semi-D at Serangoon Ave 1
Look at how these tiles are placed at rooftop in Ang Mo Kio
Man takes a walk in middle of Serangoon Road, unfazed by police car and oncoming traffic
More About:
roof
dangerous
Youths behaving badly