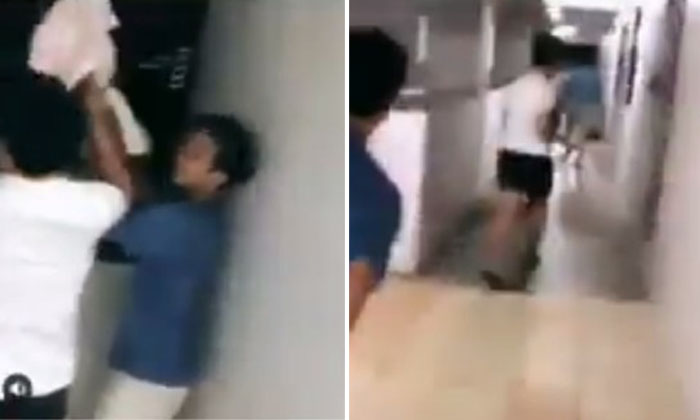 Several boys were captured on camera laughing while throwing a clothes rack off a high rise building.

The video was posted on Instagram with the caption "F*** la funny, I cannot".

In the video, two boys are helping each other get the clothes rack over the edge, while another person films the incident.

Everyone can be heard laughing in the background.

The two boys release the clothes rack and it falls down to the ground.

The video ends with the boys jogging away in fits of laughter.

Obeseneo, the Instagram user who uploaded the video, added a comment which said: "By the way guys, don't save the video and post because later kena trend, we die."

Stomper Mr Tan alerted Stomp to the video, which was also shared on the Fabrications About The PAP Facebook page on Nov 18 at 11.36am.

The caption on the Facebook post stated: "Dear parents, do tell your kids high rise littering is a criminal offence. This is not funny."

Facebook user CK Foong warned the boys and said they would regret their action if someone was killed.

Facebook user Daniel Lamborghini pointed out the irony of the situation.

Related Stories
Youths pour curry down building: 'Bet you all $1 each that this is going to Stomp'
Youth sits on ledge and pours Coke down building in expletive-laden Instagram video
Boy makes show of throwing plastic bottle off building while being filmed
More About:
Youths behaving badly
youth
dangerous
reckless