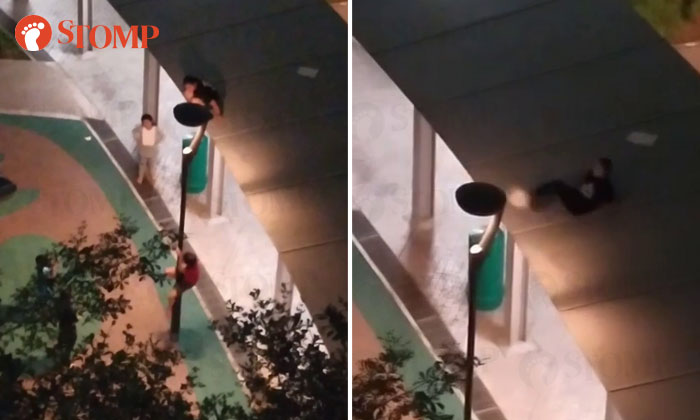 A group of youths were seen climbing up a lamp post to get on top of a walkway shelter at Punggol on Jan 31.

Stomper Regina, a resident in the vicinity, shared with Stomp videos she took of the youths playing at a playground at about 9.30pm.

She expressed concern at the youths putting themselves in danger and also damaging public property.

"In Punggol Edgedale Plains, this is a very common sight," she said.

"This group of children particularly seem to love utilising the trusty lamp post to climb onto the shelter so as to stomp and play soccer on it.

"Apart from playing on the shelter, these kids also love playing soccer at void decks and common function halls despite the "no ball games" signs and us constantly reminding them not to play in such areas.

"What irks me the most is that they love directing their balls towards lamps, of which several have already been damaged."

Regina added that she has tried advising the youths but "they do not listen". She has also reported this to the town council.

"These kids can begin playing from 2 to 9pm.

"Have their parents no concern for their whereabouts or their safety?"