Auntie 'tsks' at 14-year-old boy at Clementi Mall... and all hell breaks loose 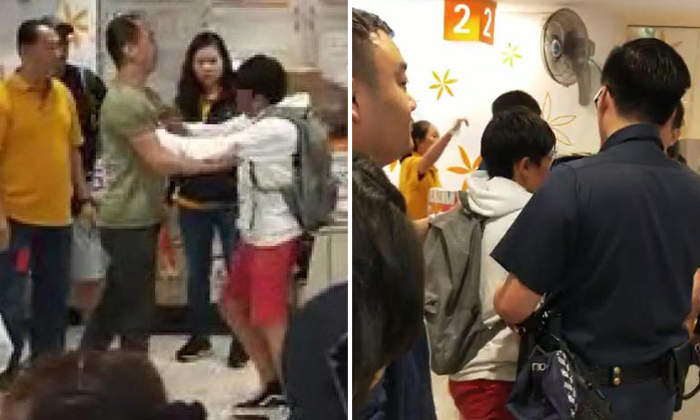 An altercation involving several parties broke out in Clementi Mall on Saturday morning (Dec 21) after an auntie tutted at a teenager for blocking her way.

According to Lianhe Wanbao, a woman had been upset with a 14-year-old boy for blocking her way in FairPrice supermarket and made a 'tsk' sound.

Angered, the teenager scolded the woman and hurled a string of Hokkien vulgarities at her.

The woman's daughter was upset with the teenager's lack of manners and immediately went forward to slap him.

Already hot-headed, the teenager rushed forward and tried to attack the pair.

A middle-aged man then tried to intervene and break up the dispute.

A witness, who declined to be named, alerted Wanbao to the incident after seeing the teenager and the middle-aged man in a physical altercation.

The police arrived not long after.

Responding to queries, the police said they were alerted to a case of voluntarily causing hurt along Commonwealth Avenue West at 9.29am.

The teenager was taken to National University Hospital.

Related Stories
Uncle scolds man at Bugis Junction supermarket: "When I was your age, I was 100x more handsome than you"
Guy throws older man onto ground, kicks him repeatedly at Golden Mile Complex
2 men arrested after messy fight breaks out at Jewel Changi Airport
More About:
dispute
fight
rude
Youths behaving badly