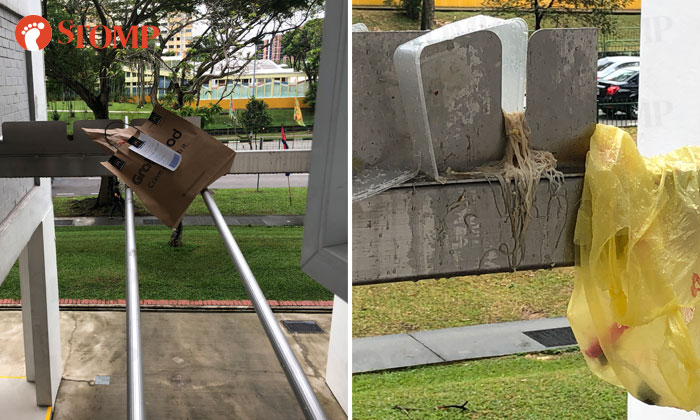 Stomper Gladys is frustrated with a neighbour who has frequently been throwing rubbish and food that gets caught on poles hanging outside her second-storey unit at Block 776 Yishun Avenue 2.

Since November last year, the neighbour has thrown paper bags from food delivery companies Foodpanda and GrabFood, as well as plastic bags filled with waste from a higher floor.

However, the final straw came when Gladys found bee hoon stuck on the pole hanging fixture outside her kitchen window on Aug 30.

"I am a victim of high-rise littering," she said.

"Such unneighbourliness takes place regularly but on that morning, the culprit went above and beyond what I have encountered in the past.

"Two plastic containers containing bee hoon were thrown out of the kitchen window.

"The plastic containers cracked and got stuck on the pole hanging fixture that the Housing and Development Board (HDB) had recently installed.

"I would like to point out that because I live on the second floor, food stuck outside can easily attract pests such as cockroaches, ants, lizards and birds.

"Thankfully rats can't climb the wall but you never know when they might get bitten by radioactive spiders.

"The food waste was stuck in a location where I cannot access without putting myself in bodily harm.

"Even after heavy rain, the bee hoon was still stuck there.

The noodles were eventually removed from the fixture later that day by the town council after Gladys made a complaint.

Gladys, who moved into her Yishun home two years ago, told Stomp that the problem started after HDB had installed the pole hanging fixtures as part of the Home Improvement Programme (HIP) last year.

However, she is unsure if her upstairs neighbour had been throwing litter down prior to this.

"After paying for the HIP, I can't use the hanging fixture because I have cigarette butts thrown down from upstairs as well as food waste," she said.

"Who wants to put clean clothes outside their home and bring in stained clothing unless they own a tie-dye shop, which I do not, or risk having their clothes being set on fire."

Stomp has reached out to the town council for comment.