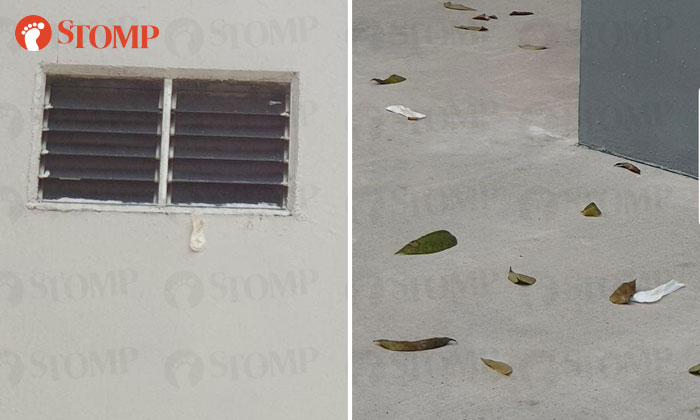 Of all the things people have thrown out of their windows, nothing is quite as unhygienic or disgusting as soiled sanitary pads.

A Stomper told Stomp that a resident at Block 439 Yishun Avenue 11 has been throwing pads from her unit for about a year now.

Bloody and used pads have been a common sight at the foot of the block but until now, the Stomper has been unable to trace who has been doing this.

"On Saturday (Aug 24), we saw a pad stuck to the wall outside a window on the third floor," she said.

"I believe that the culprit lives there and had thrown the pad out of the toilet window.

"This is such disgusting and uncivilised behaviour and should not be tolerated as it affects the environment and public health.

"As a responsible neighbour to the other residents living around the area, I hope by sharing this on Stomp, the relevant authorities will investigate and take action against the irresponsible behaviour of this culprit."

In response to a Stomp query, a spokesman from Sembawang Town Council said:

"This case was brought to our attention yesterday (Aug 27).

"We have identified the suspected offender and have spoken to the owner of the alleged unit this morning.

"As high rise littering falls under the purview of NEA, we have notified them of this issue and will work together to monitor the situation."