Women who paid $36 for MaxiCab ride from Changi Airport to Yishun not overcharged: ComfortDelGro 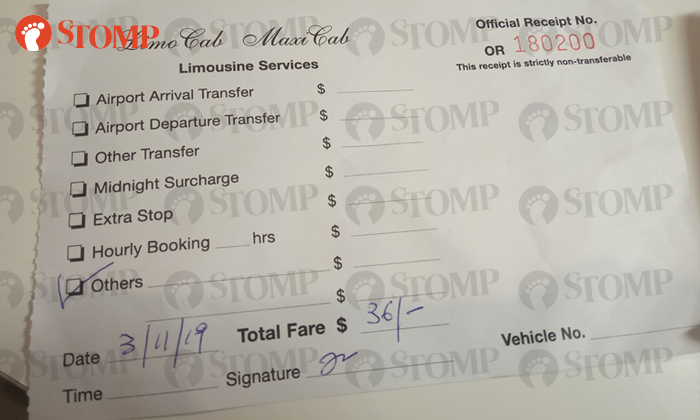 A woman was appalled to be charged $36 for a MaxiCab ride from Changi Airport to Yishun on Sunday night (Nov 3), but no over-charging was found in this instance.

Stomper Minh Danh said she had gone to pick up an overseas friend at Terminal 3's Arrival Hall at around 10.10pm, and the two then proceeded to the taxi stand near Belt 44.

She alleged: "Upon reaching the taxi stand, we noticed that there were very few people in the queue, although there were a lot of taxies waiting to pick up passengers.

"Almost all the available taxis we observed at the stand were four-seaters, except for a big MaxiCab limousine taxi.

"Although there were only two of us and we had no need for such a large vehicle, the MaxiCab driver was very firm and quickly collected our small piece of luggage and placed it in the taxi.

"When enquired about the cost, he told me it was the same as the other taxies in the queue."

Minh Danh said that she did not press the matter further for fear of upsetting her friend.

She added: "Upon reaching our destination at Yishun, the metered fare was $36.

"However, the driver did not give us the receipt and said that his printer was faulty.

"We asked for a handwritten receipt and was given one that did not provide any information such as the company's contact info or the vehicle's registration number.

"The service section was also ticked as 'Others' and not 'Airport Arrival Transfer', which was apparently the purpose of our journey.

"Furthermore, the field for the time of the journey was blank on the receipt.

"We ended up paying for an expensive trip on a taxi we had no need for.

"The journey from my house in Yishun to the airport, taken at 9pm on the same day, which covers the same distance and has the same fare structure (25% peak hour surcharge), cost only $22."

Minh Danh subsequently provided feedback about what she felt was "poor taxi service" in an email that was sent to transport company ComfortDelGro, which operates MaxiCab.

The email was also sent to Stomp, Changi Airport, the Land Transport Authority (LTA) and the Consumers Association of Singapore (CASE).

Minh Danh said in the email: "In short, I am pretty disappointed with the quality of taxi service at Changi Airport and am writing to demand some compensation for my trouble.

"I have taken the effort to write this feedback at the end of a long day and hope to receive a reply concerning my complaints as soon as possible. I hope submitting my complaint in writing will result in a fast and satisfactory response."

In response to a Stomp query, Ms Tammy Tan, group chief corporate communications officer for ComfortDelGro Corporation Limited, said: "We have investigated the matter and found that there was no overcharging in this instance.

"Before the passengers boarded our MaxiCab, our driver also took the initiative to inform them that the distance fare was slightly higher than that of a normal four-seater taxi."

The taxi driver had also informed Minh Danh and her friend that they could choose not to take his taxi but "they decided to proceed anyway," added Ms Tan.

She told Stomp: "Unfortunately, the printer malfunctioned and a written receipt had to be given.

"We acknowledge that this receipt could have been clearer and apologise to the passengers for the inconvenience caused."

Ms Tan also said that ComfortDelGro would be extending taxi vouchers to the two passengers as a token of goodwill.

Related Stories
Cabby sacked after charging customer $70.75: Not 1st time he has overcharged, says ComfortDelGro
ComfortDelGro terminates cabby who recorded and shamed drunk passenger who failed to pay taxi fare
Photo of cabby pleading for leniency: He was given 'saman' of $200 for smoking in taxi, says NEA
More About:
ComfortDelgro
taxi
expensive
Changi airport