Photo of cabby pleading for leniency: He was given 'saman' of $200 for smoking in taxi, says NEA 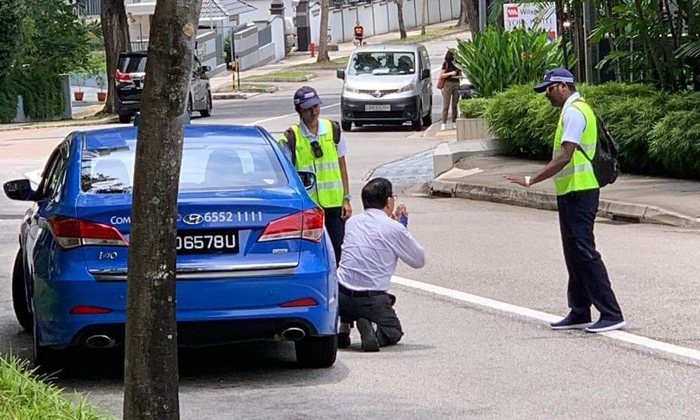 The National Environment Agency (NEA) has clarified a viral photo that showed a ComfortDelGro taxi driver pleading for leniency from enforcement officers, in response to queries by Stomp.

Several Stompers alerted Stomp to the picture which went viral online following the incident that occurred along Mount Elizabeth Road on Thursday (Oct 3), at around 12.30pm.

A circulated message accompanying the image claimed that the cabby was "begging for leniency" after NEA officers "caught him with his engine idling whilst he rested within the vehicle".

However, this is not entirely true. 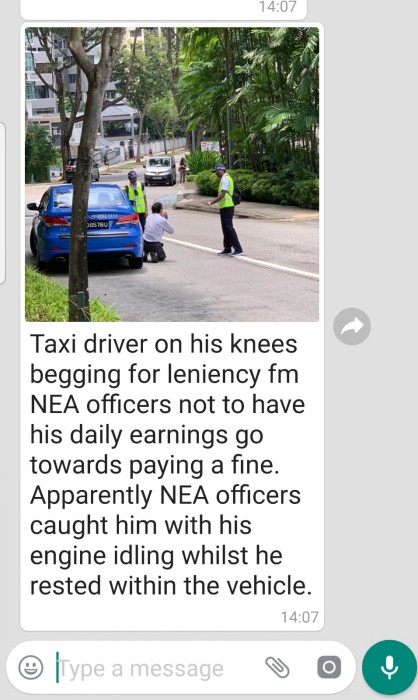 Responding to a Stomp query, the NEA said it was aware of the image and clarified that the cabby had been given a fine after he was caught smoking in his taxi.

The NEA told Stomp in a statement: "NEA is aware of an image circulating online of a man seen pleading for leniency from NEA officers.

"NEA confirms that on 3 October 2019 at about 12.30pm, a male driver was caught smoking in a ComfortDelGro taxi with the windows wound down along Mount Elizabeth Road.

"The officers notified the driver of the offence before issuing him a ticket of $200 for smoking in a public service vehicle."

Under the Smoking (Prohibition in Certain Places) Act, anyone caught smoking in a prohibited place or a public service vehicle may face a composition fine of $200 or up to the maximum court fine of $1,000.

Related Stories
NEA explains viral photos of fines for shooting rubber bands and leaving drink cans behind
NEA clears the air after Stomp query about claims of cameras being planted to fine people "smoking in bedrooms"
NEA responds to incident of man causing a scene after being caught throwing cigarette butt on ground
More About:
NEA
ComfortDelgro
smoking