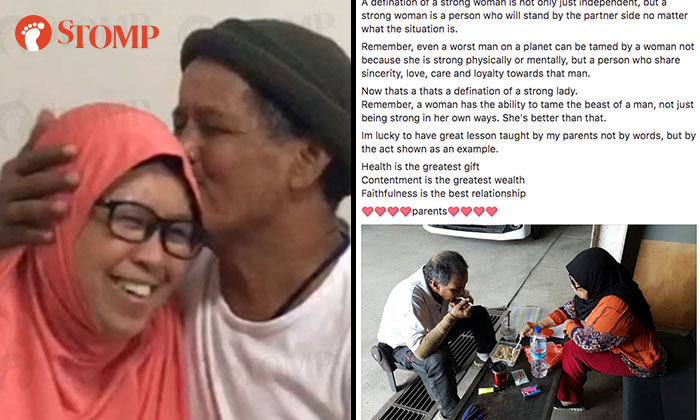 It's amazing how a single photo speaks a thousand words when it comes to defining what true love means.

In a post last year, Fariz, who goes by Riz Guitarizt on Facebook, shared a photo of his parents, Mr Suhaimi and Madam Zaliah, having a meal together, in a post.

To his surprise, the post quickly went viral, with 2,497 shares to date.

In the post, Fariz wrote that his mother chose to 'travel all the way from Sengkang to Kranji, just to share meals with dad, and make sure dad won’t go hungry'.

She used to tell Fariz after that, “Now I can rest with ease knowing that your dad is not hungry and he's all good”.

Stomp sat down with the family one year on for a chat, after the post started gaining traction again recently.

Asked about his mother, Fariz gushed: "She would travel to my dad’s workplace by bus every day to ensure he got to eat.

"She's constantly worried that my dad will go hungry, while my dad is worried that if he does work hard enough, he won’t be able to give her a good life.

"My dad is a workaholic, so he sometimes bluffs my mum, saying he has eaten already.

"They always think about each other in everything they do."

Interestingly, Fariz is so inspired by his mother's devotion to his dad that she has become the standard by which he bases a prospective girlfriend on.

Perhaps that is why the talented guitarist is still available on the market.

When we asked Madam Zaliah whether she is worried that Fariz will remain single because it will be near impossible for her son to find someone that measures up to her, she said:

"No, I’m not. I always tell my friend and relatives not to find a girl for my son. He will find someone he likes on his own.

"I also tell him that you cannot compare last time and now.

"You need to find someone grounded in the modern times."

Albeit being a reticent man, Mr Suhaimi also sang praises of his dear wife.

Mr Suhaimi, who switched his job to a school attendant at Punggol Cove Primary School, a stone throw away from the couple’s flat in Sengkang.

He told Stomp that with the change in his job, his wife no longer has to travel that far for him.

Previously, a trip from Sengkang to Mr Suhaimi’s old workplace in Kranji would take Madam Zakiah an hour and forty minutes by bus.

With Mr Suhiami’s new job, she can now reach his workplace in under 10 minutes using an e-scooter.

Moreover, Mr Suhiami also starts his work later now, meaning that he has time to spare for breakfast with Madam Zaliah.

Sometimes, he would also come home during his break to take lunch with her.

We asked Mr Suhiami how he feels knowing that his wife would travel so far just to have a meal with him.

Mr Suhiami, gleaming, replied: "Oh, I felt very happy because she is my good wife."

A fitting reply for the reticent yet passionate man, as he leaned over and planted a kiss on Madam Zaliah's head.

The couple is still as loving as the day they got married.

Watch Stomp's interview with the happy family below.

Related Stories
Woman's 'His Love vs My Cancer' story will make you cry buckets: "I really thought I was going to die"
Overweight 120kg Thai 'Ball' overcomes bullying, marries pretty nurse GF after 10 years of dating
Love Story: We were both broken-hearted when we met but found our soulmates in each other
More About:
love
relationships
couple
inspiring
romance