Love Story: We were both broken-hearted when we met but found our soulmates in each other 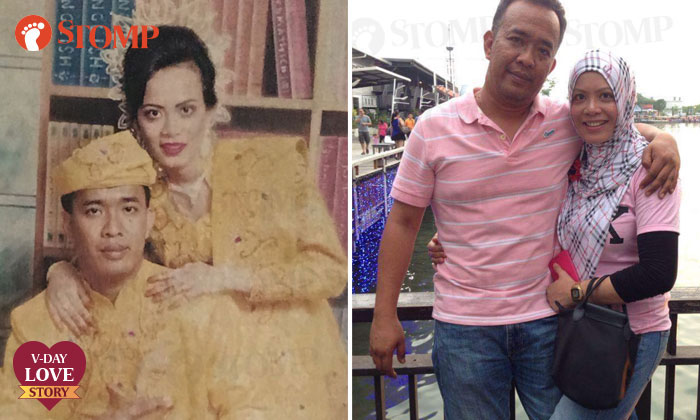 Before the world of Internet dating, there was teletext.

Siti Saniah met the love of her life in 1997, after he posted a Live Ad on MediaCorp's Teletext that was accessed via the television.

Having broken off an engagement with a childhood friend, Saniah's friend, Sabrina, suggested she make new friends via the platform.

He left his pager number at the end of the ad.

Saniah, who was 21 years old at the time, kept Atbari's number for a week before finally summoning up the courage to page him.

"It took him less than 15 minutes for him to reply," she said.

"Though it was a bit weird talking to someone over the phone who was a stranger to me, I was comfortable throughout the conversation.

"He sounded mature through his voice and was keen to meet up the very next day.

"After much consideration, I agreed and set my preferred location – my neighbourhood coffeeshop."

Saniah remembered hiding behind a wall at her void deck to glance at Atbari as he came out of his van.

"I gathered all my courage and approached him."

They headed to the nearby coffeeshop where Atbari ordered two coffees, it was the first time she was trying it.

Having both had their hearts broken by previous partners, they found solace and comfort in each other and they sat and talked for two hours.

"We ended the date after he passed me a cassette of love songs saying confidently that those songs would heal my broken heart, just like it did for him," said Saniah.

"As months passed, we got closer and I truly felt contented whenever we spent time together.

"We shared a lot of interests and I just felt that we are really meant for each other."

The lovebirds were engaged in June, 1998, and became husband and wife six months later on 12 December.

"From mere strangers, we then became friends which eventually lead us to our final destination: Married life."

"I’m glad that we are happily married with five lovely grownup children.

"We have overcome all the good and bad times together yet there are a lot more challenges to come.

"Each year on Valentine’s Day, we will always talk about our first date and share it with our children.

"We laugh as it was amazing how two broken-hearted people met and became soulmates.

"It was a miracle that our broken hearts from our past healed shortly after we met.

"I believe it was love at first sight when my heart said, 'he is the right man for me'.

"He is indeed an understanding, patient and loving man and I never, ever have regretted being his wife.

"He may not be my first love but he will be my last and only true love in my life.

"I want to grow old with him and keep all these fond memories.

"I truly love my Mr Right till the end of my life."

The contest is proudly sponsored by Stomp and Flower Advisor.