Woman's 'His Love vs My Cancer' story will make you cry buckets: "I really thought I was going to die" 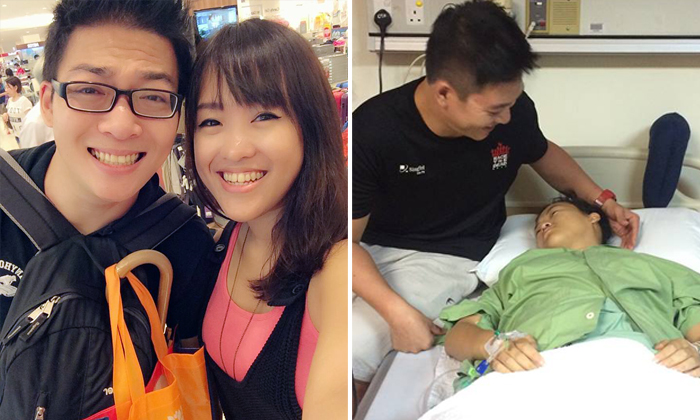 Jennifer Teh Yin Li and her boyfriend, Young, were enjoying their blossoming romance when six months into the relationship, their lives where turned upside down after she was diagnosed with ovarian cancer.

Jennifer, now 30, had previously shared her battle with Stage 3 cancer and inspirational journey to recovery after having a 4.8kg cyst removed in March 2015.

In a Facebook post, she documented how her stomach swelled to the size of someone who is 32 weeks pregnant due to a painful cyst that had grown to be the 'size of a basketball'.

Immense pain, difficulty sleeping, a 24cm wound, dropping 10kg, hair loss, seemingly never-ending chemotherapy and injections were just a part of her ordeal after she underwent surgery to remove the cyst.

Throughout it all, she remained positive and even wrote, "Never stop smiling".

Jennifer, who completed chemotherapy in end June 2015, also expressed gratitude for her loved ones and their support, which helped to keep her strong.

"Here I am now! Did occasional workout (weekly) and [am] happy to live my next tomorrow with no regrets for I was given a second chance. To accept whatever that's given and to forgo whatever that's not mine. Life is short. Smile and be happy," she had written.

Jennifer's post went viral and deeply moved netizens, who lauded her courage and called her an inspiration.

Two days ago (Feb 11), Jennifer shared a new photo album and story, detailing how her boyfriend, now 27, stayed by her side throughout her fight with the illness.

She told Stomp that they got together in 2014 and in her Facebook post titled 'His Love vs My Cancer', shared all the many ways he encouraged her and was always there for her.

Jennifer wrote in a caption accompanying one photo, "I have completely zero experience and encounter on cancer... I really thought I was going to die... We even sat down and discussed about our breakups and moving forward plan... If I'm going to die, I really have no intention to keep him with my sad memories.. I rather he remember only the good times we had..."

She had even wondered if their love was real because when she first learned of her condition, "We were only together for six months and he has shown no sign of leaving".

She added, "He was there for me whenever I needed him... I still remember those nights where we hugged each other and cried. The fear of losing and leaving was so strong and hurtful..."

Besides making Jennifer promise that she would never give up, Young even bought her a wig to boost her confidence, as well as shaved his own head to show his love and support.

Jennifer wrote, "Despite all the rejections I'd received from others (and nasty comments), he was the one who stood strong and unaffected... even though some might have thought he deserved better."

"This man is real extraordinary... Must be from my good karma."

Jennifer also said that she used to think stories about true love only existed in movies, but she believes in it now because Young has taught her how to love selflessly and "it just happened to me".

"Thank you for your love... for truly accepting me after what I've been through, never leaving me when I was at my ugliest and my lowest.... I am truly blessed to have found you," she added.

With over 2,800 likes and more than 3,200 shares to date, Jennifer's post has been a hit with netizens who called it a true love story.

One user commented, "Makes me realize how much I take my relationship for granted! So inspired to live and love with no stops!"

Jennifer told Stomp, "I hope by sharing [my story], it can help to create more awareness on cancer and love."

Read her full post in the gallery above and try not to cry (but we will understand if you do).