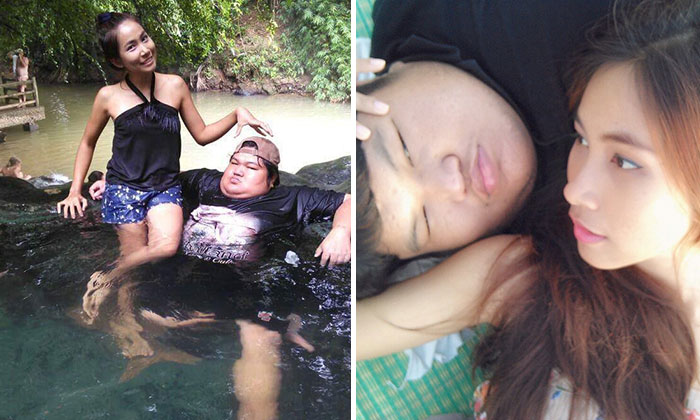 An obese Thai man proved everyone wrong when he wedded his sweetheart of 10 years.

The pretty Puwadol, weighing 44kg reportedly fell in love with the 120kg Kudi due to his kindness, reports Lianhe Wanbao.

Despite many looking at their relationship unfavourably, the two finally tied the knot in 2017, and Puwadol even bore Kudi a healthy baby in December.

Growing up, Kudi was often teased for his weight and even given the nickname, 'Ball'.

Although the outside world was harsh on Kudi, Puwadol saw past his appearance for the kind and gentle person he was.

She said that Kudi would always stay by her side to give her encouragement and support when she needed it the most.

Puwadol gradually fell in love with Kudi and decided to spend the rest of her life with him.

She said: "I know he’s not good looking and fat, but he has a kind heart. This is the most important thing.

"He’s also very caring, and even though he doesn’t like girls with short hair, he’ll still tell me I look cute even if I trim my hair."

According to the Thai media, netizens who originally hurled insulted at Kudi for his weight had a change of heart upon seeing photos of the happy couple and their baby.

A netizen even jokingly added: "This example tells us that to live is to have hope."

Related Stories
Miss Germany finalist reveals Korean BF, online stalker threatens to 'torture and kill' them
Taiwanese man facing amputation breaks up with GF --- only for her to propose
Confessions of a heartbroken man, 19, who had affair with 35-year-old married woman with kid
More About:
love
relationship
inspiring