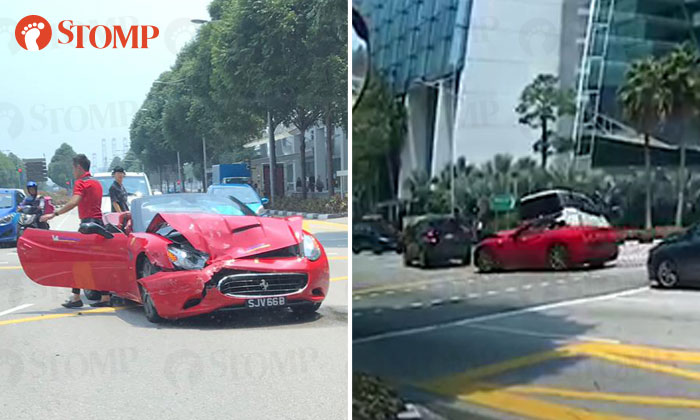 A 29-year-old woman was taken to hospital after an accident involving three cars, including a Ferrari, at the junction of Bayfront Avenue and Sheares Link on Thursday afternoon (Sep 26).

Stompers Jason, Michael and Sunflowerapple alerted Stomp to photos and a video circulating online of the accident.

In the video, it appears the Ferrrari driver crashed head-on into the back of a white MPV while trying to avoid a Toyota Altis that made a wide left turn onto Bayfront Avenue.

From the photos, the front of the Ferrari was badly damaged.

"One of the car drivers, a 29-year-old woman, was conscious when conveyed to Raffles Hospital," a police spokesman said.

Related Stories
62-year-old taxi driver and 2 passengers taken to hospital after accident with car in Chinatown
2 motorcyclists hurt in accident with 2 trailers on AYE, 1 driver arrested
Rider gets knocked off bike by van that made sudden lane change along expressway
More About:
accident
Ferrari