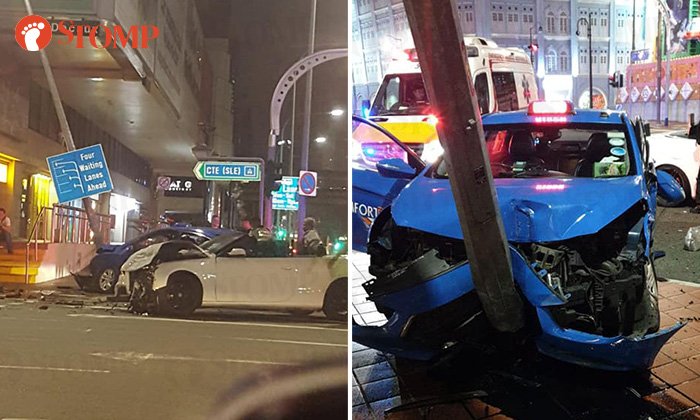 A 62-year-old taxi driver and two female passengers on the taxi were taken to hospital after an accident involving a car at about 3.47am on Tuesday (Sep 24).

Both the taxi and the car were extremely dented and photos show that the taxi had collided into a lamppost.

Debris is scattered on the ground.

In response to a Stomp query, the police said: "At 3.47am on Tuesday (Sep 24), the police were alerted to an accident involving a taxi and a car at the junction of Upper Cross Street and Eu Tong Sen Street.

"The taxi driver, a 62-year-old man, and two taxi passengers, aged 27 and 29, were conscious when conveyed to Singapore General Hospital.

Related Stories
65-year-old cyclist in e-scooter accident on life support, family told to prepare for the worst
Rider gets knocked off bike by van that made sudden lane change along expressway
PMD rider brakes suddenly to avoid hitting car -- but crashes into it anyway
More About:
accident
Chinatown
SGH