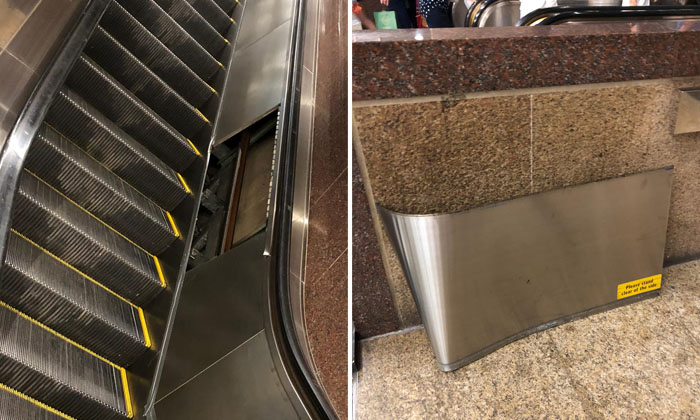 A woman sustained a deep cut on her shin after a side panel on one of a down-riding escalator at City Hall MRT Station dislodged at about 1pm on Friday (Sep 14).

There was another commuter who was injured although there were no details provided.

Stomper Chan, who was on her way to a meeting, was passing by when she saw the incident.

In photos that were forwarded to Chan by a friend, a piece of metal from the escalator is seen leaning against a wall.

According to Chan, a person dragging a luggage apparently hit the metal panel with it, which might have caused the panel to be dislodged. The person with the luggage allegedly left after that.

She said: "The metal plate cut the left shin of a woman, she sustained a deep cut, exposing her bone. I'm not sure if there was a fracture."

The two commuters were on the escalator when the incident occurred, said SMRT's vice president of corporate communications, Ms Margaret Teo.

In response to Stomp's query, she said: "At around 1.40pm on Friday (14 Sep), a side panel on one of our down riding escalators at City Hall MRT station dislodged and two commuters who were on the escalator were injured.

"Our station staff provided first aid to the commuters, one of whom was conveyed to hospital for further treatment. Our care team has reached out to the commuter through her family member to provide assistance as best as we can.

"We are very sorry for the accident and wish the commuter a speedy recovery.

"After repairs and thorough checks, the escalator was put back into service on Friday night. The incident is currently being investigated."

The Singapore Civil Defence Force also told Stomp that it received a call for ambulance assistance at about 1.40pm.

A woman was conveyed to Singapore General Hospital.