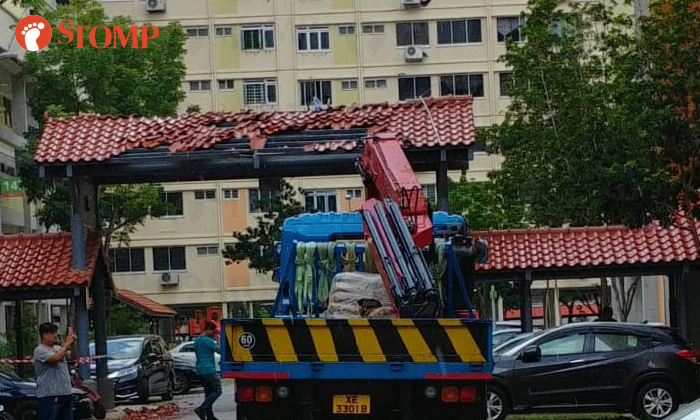 A crane on a lorry knocked into a shelter located in between Blocks 144 and 147 at Simei Street 2 at about 11.10am this morning (Jul 13), causing parts of the shelter to give way.

Stomper Cym shared with Stomp photos and a video of the aftermath of the incident.

Debris is seen littered on the ground beneath both ends of the shelter, and a blue lorry is seen parked a distance away from it.

Many of the tiles were also dislodged from the shelter.

Cym, who resides on the 7th floor of Block 146, was in his kitchen when he heard a loud noise.

He said: "I was washing dishes when I heard a loud 'boom', which sounded like bullets were being shot.

"I think the crane on the lorry hit the shelter because they didn't lower the crane enough, and the tiles kept falling after that.

"I saw some people coming down to check on their cars to see if there were any damages from the debris, but I think there wasn't much damage because they left very soon."

According to Cym, no one seemed to be injured from the incident and the debris was cleared by cleaners using spades.

In response to a Stomp query, the police said that it was alerted at 11.14am to an accident involving a lorry that hit the covered walkway shelter near Block 144.

"The lorry driver, a 59-year-old man was arrested in relations to the case," said the police spokesman.