Woman slashed by man says she doesn't know him, was almost hit by car while trying to escape 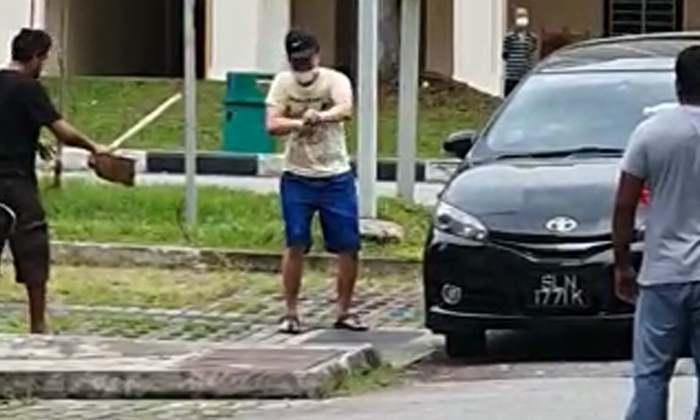 He was about to have lunch at his worksite near Block 409 Choa Chu Kang Avenue 3 when he saw a woman fleeing from the open air carpark nearby.

What shocked Mr Ravi Santhoshkumar, 25, was the sight of a man in a yellow T-shirt chasing after her with a knife. She was able to escape after he slashed at her, said the migrant worker.

Then an off-duty police officer stepped in. Using a hoe from the worksite, the officer was able to fend off the assailant.

In video clips circulating online, he is then seen disarming the man and subduing him with the help of six others, including Mr Ravi.

The police said they were alerted to the case of voluntarily causing hurt by a dangerous weapon just after noon on Tuesday.

A man, 23, was arrested in relation to the case and was taken to Ng Teng Fong General Hospital.

A woman, 27, was taken to National University Hospital.

Videos of the incident show the woman with blood on her face as she approaches a passer-by for help.

Speaking to Shin Min Daily News in her home after the ordeal, the woman said she did not know the man. He suddenly rushed towards her and slashed at her, said the woman, who had injuries on her head and knees.

Mr Ravi told Chinese evening daily Lianhe Wanbao the woman was almost hit by a car as she dashed across the road leading into the open air carpark while trying to escape.

Shin Min reported that the car blocked the man's path and he tried to attack the driver.

The police officer stepped in to defuse the situation but the man remained agitated. Videos showed the man shouting "Why?" before using the knife to cut himself. It was then that the officer grabbed the man's wrist to disarm him.

A resident, known only as Mr Rahman, was among those who helped subdue the man. The real estate agent, 59, said the knife was 15cm long and the man held onto it tightly.

Ms Zhuo Xiuying, 64, recognised the man as a regular customer at the provision shop where she worked.

She tried to calm him down and told Wanbao he said he had "nothing left". Investigations are ongoing.