Woman points middle finger, scolds driver in situation made worse by everyone and everything 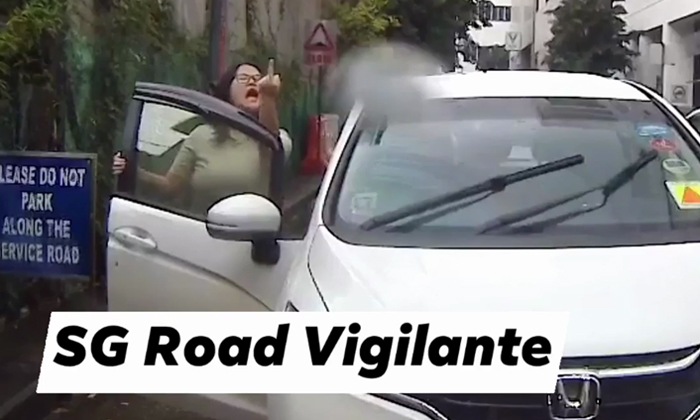 A road dispute that saw a woman scolding and flashing her middle finger at another driver is a fine example of how a situation can go from bad to worse.

Facebook page SG Road Vigilante posted a video of the incident that occurred along the service road to Nanyang Academy Of Fine Arts (NAFA) Campus 2 at Bencoolen Street.

According to the video's time-stamp, it was taken on October 31, at around 2.46pm.

In the video, a Honda driver can be seen going against traffic on the two-lane road and coming head-to-head with the motorist recording the video.

A man and a child can be seen alighting from the white Honda just as another maroon car enters the scene.

The Honda driver, a woman, then exits from her vehicle and approaches the motorist recording the video.

She can be heard chiding him: "Just now you don't reverse a bit and let me through, how am I going to let you pass? Still speed up and rush over, what's the meaning of this? I was planning to give way to you, you know?"

By this time, the maroon car had stopped next to the Honda, leaving even less space.

It is unclear what happened afterwards or how either driver got out of the sticky situation.

While many netizens slammed the woman's behaviour, many noted that there were many factors at play too.

Some felt that the motorist recording the video could have been more gracious instead of aggravating the situation.

Another pointed out that the maroon car made things even worse.

Several netizens also said that there were many illegally parked cars along the road that contributed to the issue.

And finally, the burning question:

Related Stories
Volkswagen driver scolds motorist and flashes middle finger after getting honked at
Driver hurls vulgarities at couple during 'standstill' in queue at Yuhua Place carpark
Woman accused of refusing to give way and blocking traffic: 'Why should I let cabby bully me?'
More About:
road rage
dispute