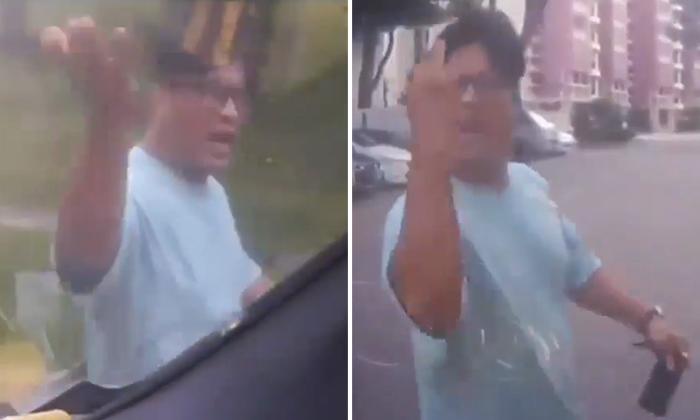 A Volkswagen driver was caught on camera behaving aggressively and flashing his middle finger at another motorist during a road rage incident in Yishun.

Facebook page SG Road Vigilante uploaded a video of the incident that occurred near Block 291 Yishun Street 22 on Thursday (Sep 3).

According to the Facebook post, the Volkswagen driver had exited his car to confront a motorist who was travelling behind him as he was upset over being honked at.

Both vehicles had been stopped at a carpark gantry prior to the confrontation.

In the video, the Volkswagen driver can be seen stopping his car by the side of the road after both vehicles passed through the carpark gantry.

He then exited his vehicle and began gesturing angrily at the motorist.

Both parties started arguing and the Volkswagen driver subsequently flashed his middle finger at the motorist.

Netizens have speculated over what happened, with many pointing out that the motorist had simply honked to alert the Volkswagen driver, whose car can be seen reversing in the video.

One commented: "The honk is merely for awareness and not for provocation."

Related Stories
Cyclists block car and hurl vulgarities at driver at ECP
Driver hurls vulgarities at couple during 'standstill' in queue at Yuhua Place carpark
Woman accused of refusing to give way and blocking traffic: 'Why should I let cabby bully me?'
More About:
road rage
dispute
Yishun
middle finger