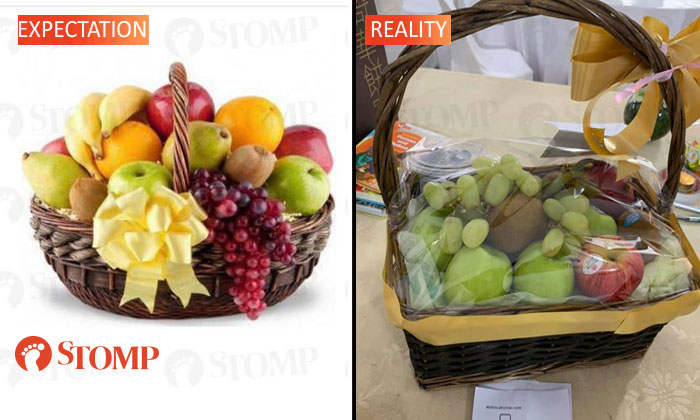 In a case of reality not living up to expectations, Stomper L and her family were sorely disappointed when they received a fruit basket that they had intended on bringing to a funeral service on Wednesday (May 9).

L had purchased a "Gift of Nature" fruit basket from Her Flowers for $75 that was to be delivered before she was to attend the funeral at 12pm.

In an email thread seen by Stomp, a customer service officer updated L at 9.07am that their supplier did not have enough of a variety of fruits.

L told Stomp that when she received the fruit basket after 11am, she was shocked at how it looked.

"The whole fruit basket looked so pathetic, it was a stark contrast from the photo on their website," she said.

"It is clearly a case of misrepresentation and false advertising.

"It is not even about the fruits they used to replace the ones that were unavailable.

L said that when she tried to contact Her Flowers, she was told someone would call back but she did not hear anything from them.

Since L needed to bring the fruit basket to the funeral event at 12pm, she and her family scrambled to find a worthy replacement and ended up paying an additional $110 for another one.

"The fruit basket was for praying during the ceremony," she said.

"Rushing to get a replacement for the ceremony just led to more stress during this tough period."

L informed Stomp that a customer service officer got back to her later that day via email to apologise for the inconvenience and offer a 20 per cent refund.

The representative said that a full refund was not possible as costs were incurred for the item.

However, after L objected, they escalated the matter to a manager who eventually offered to give L back 100 per cent of what she paid.

L said she wanted to share her experience to inform others that the actual products "don't measure up" to the photos in their online catalogue.

Stomp has reached out to Her Flowers for comment.

Related Stories
Fan sorely disappointed by how Domo dish looks like in reality compared to menu
Reality is far from expectations for these Stompers who bought items online
Carousell user says dress has "no defect" -- but buyer gets it with stains, torn seams and odour
More About:
fruits
bad service
expectations vs reality