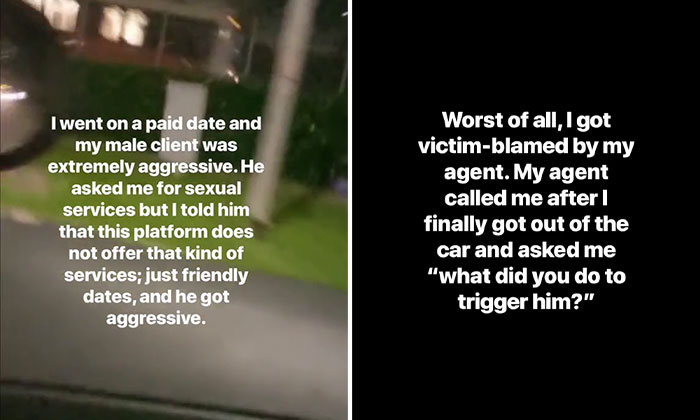 A woman experienced a terrifying experience while on a paid date, after her client flew into a rage when she rejected his offer for sex.

Using an anonymous handle, Lxlxl666, the woman took to TikTok to recount her harrowing experience with her male client, whom she said was in his 20s, in a video posted last Thursday (Nov 17).

In the video, the man is heard yelling at the woman, as she calmly tells him to drop her off.

"This went on for quite some time before the video was taken," the woman wrote, adding that he was driving her to "some ulu (secluded) place".

"I was ready to jump out of the moving car because I was that scared.”

She said he only agreed to drop her off after she threatened to call the police and threw his money back at him.

She also expressed her bewilderment that her agent did not side with her. When she contacted the agent, the latter asked: "What did you do to trigger him?"

She did not name the company she was working with.

@lxlxl666 Exposing the company that put my safety at risk. I am posting this to create awareness about the truth of paid dates. Women’s safety should be prioritised, especially when there’s young girls on this platform. #paiddates #Sgtiktok #fyp ♬ Get You The Moon - Kina

Lxlxl666 included screenshots of her conversation with the agent, where she regularly shared her location throughout the date.

According to the screenshots, the woman had texted her agent to "get (her) out of here" as she was "scared" at 9.51pm, but was told to "relax first".

"I don't understand why I, the girl who was faced with an aggressor, (was) not believed," the woman said.

"I am not an escort which is why I turned him down, and he got upset. But even if I was, I deserve to be safe and protected from harm.

"No matter what line of work, no one should face any form of violence."

WHAT ARE PAID DATES?

Paid dates, or rent-a-dates, have been gaining popularity among young adults recently – especially for those simply looking for companionship or some arm candy to bring home to relatives.

Unlike an escort service, there is usually no physical contact allowed between the two parties.

Related Stories
Student choked woman during date till she was unconscious to smell her feet, satisfy his fetish
Man goes on a date with woman from WeChat, ends up paying $263 for her glass of wine
Tinder date promises to treat girl for a meal...but goes to the toilet and does not return, leaving her to foot the bill
More About:
date
bad date
aggressive
scary