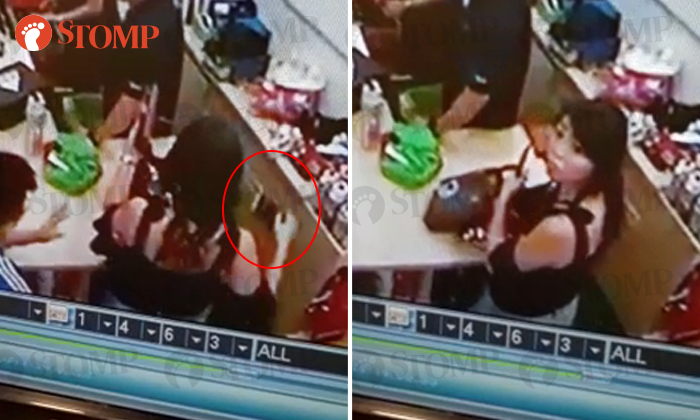 Stomper Angie accidentally left behind her wallet on the counter of a sports shop in Hougang Mall on Oct 29 -- then returned five minutes later to find that another female shopper had already taken it.

The incident occurred in Sportslink at around 2.14pm.

Angie shared with Stomp CCTV footage of the incident, which she retrieved from the store.

It shows the woman, whom Angie said was accompanied by her son (man in blue shirt), placing her handbag on the counter while two cashiers carried on with work.

Using her left hand, the woman took out her own red wallet from the bag. Almost immediately, she placed a smaller black object into the bag with her right hand.

According to Angie, the black object was her wallet.

Said the Stomper: "She actually did this in front of her son.

Here's a breakdown of what Angie lost:

Angie, who has made a police report, told Stomp: "The shop has provided the woman's bank transactions details to the police.

"Police said investigations and the bank's response will take some time, so I hope the public can help identify her in the meantime."

In response to media queries by Stomp, the police said they were alerted at 2.35pm to a case of dishonest misappropriation of property at Hougang Mall.