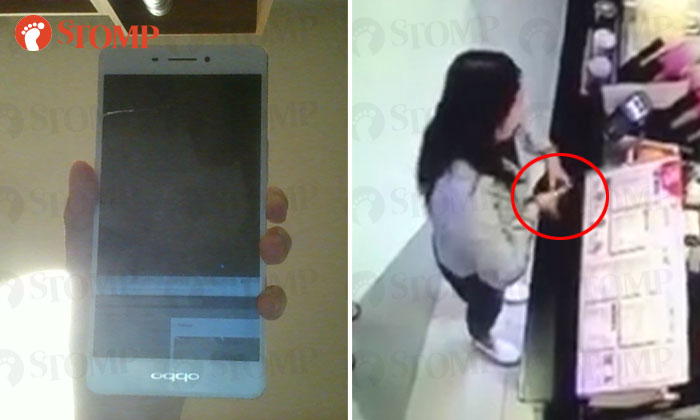 Stomper Denise experienced mixed feelings after retrieving her phone that was taken by a woman at a LiHo outlet at Bugis+ on Oct 29.

"I was happy and sad at the same time as my phone was reformatted and all data had been wiped out," she told Stomp.

Stomp previously reported on how Denise had accidentally left her phone on the counter of the bubble tea stall and had returned just minutes later to find it gone.

She had shared closed-circuit television footage with Stomp showing a woman in the queue behind her picking up the phone before putting it in her bag.

Denise informed Stomp that she received her phone on Thursday (Nov 2).

A police officer informed her that all ten of her cards, including her IC and bank cards, had been thrown into different rubbish bins.

Denise shared the flood of emotions she experienced from the incident:

"I'm angry at myself for making such a careless mistake that I would not commit usually. At the same time, I'm feeling sad about all the photos and videos of my loved ones that I did not back up, including those of my mum who passed away long ago."

She added that she hopes her story will stop others from taking things that do not belong to them:

"I just hope that everyone will not let greed take over them. They might be able to get away with it once but eventually, bad karma will catch on to them.

"I have seen comments saying finders keepers but I strongly disagree with whoever came up with that analogy.

"It just shows how one can let greed and selfishness take over their conscience without thinking about how the other party would feel. Think before you act. The good will always be rewarded with good.

"I also sincerely thank everyone who has helped me to share and track this lady. I am extremely grateful and no amount of thank yous will ever be enough. I will be extremely vigilant from now on."

In response to media queries, the police said that a 44-year-old woman is assisting police in investigations.