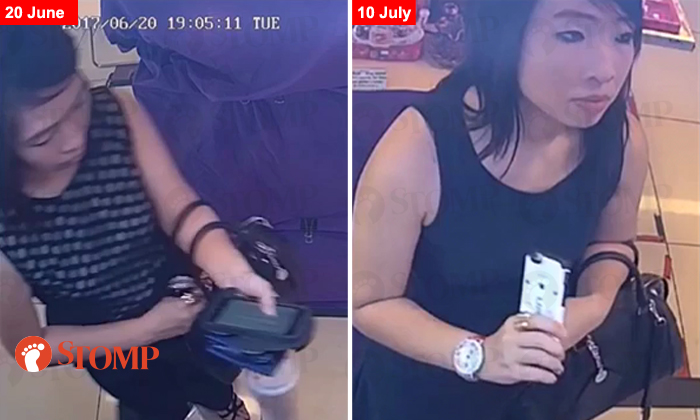 A woman was caught on camera taking a watch from Stomper Anon's pushcart stall on June 20, then returning again on July 10 to commit the same act in a similar manner.

The two incidents occurred at a shopping mall in the Raffles Place area, where Stomper Anon's stall has been located at for the past six months.

According to Anon, the watches taken by the woman are worth $168 each.

In the first case, CCTV footage shows the woman passing by the stall on June 20, at  7.05pm.

She can be seen picking up a watch and looking at the item, before placing it inside her handbag and walking away.

The second incident occurred about three weeks later on July 10, also at 7.05pm.

This time, CCTV footage shows her approaching the stall and picking up a watch on display.

She is then seen trying on the watch and adjusting its display box, before walking off while still wearing the accessory.

Anon said he has six CCTV cameras installed at his stall, in hopes of deterring people from doing something like that.

On both occasions, his stall assistant had been attending to other customers at the front and hence, did not notice the woman.

Anon told Stomp, "I decided to let it go the first time but she actually had the cheek to return again, so now I am sharing this video."

Related Stories
Not the sharpest tool in the shed: Man caught stuffing axe under his t-shirt at Tampines shop
Woman takes Samsung tablet that was left behind by 11-year-old at Waterway Point cinema
Man has 'perfect plan' to take iPhone 7 Plus that woman left behind at Punggol supermarket
More About:
thief
theft
shoplift
shoplifting
steal
stealing
Raffles Place
woman taking watches from stall
cctv