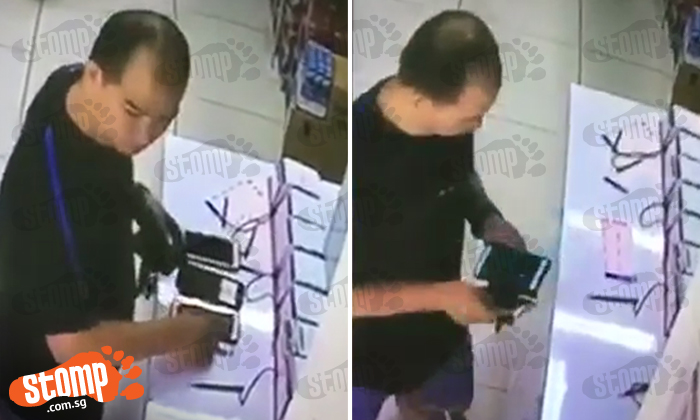 A man was caught on camera taking away an iPhone 7 Plus that Stomper Mah had accidentally left behind in a supermarket at Punggol Block 273C yesterday (Apr 6).

The incident took place at around 3.15pm and the phone was left on a Singapore Pools counter in Li Li Cheng Supermarket.

Stomper Mah shared CCTV footage showing how the man had approached the counter and appeared to lurk there for some time, while using his own phone.

He can be seen occasionally looking up from his screen to observe his surroundings and other passers-by.

At one point, he placed his own mobile device on the counter and continued using it.

After awhile, the man then picked up his phone, looked around, before taking away the other phone too and leaving the scene.

"Does anybody know him? Kindly get him to return my iPhone because there are a lot of my late mother's photos and memories. They are only stored in my phone.

"If the phone is returned, I will not pursue this matter any further."

Stomper Tee, who is Mah's daughter, also alerted Stomp to the incident and said the family is hoping that the man can be identified with the help of social media.

According to Tee, the phone was purchased in December and hence relatively new.

She told Stomp that efforts to call Mah's phone have been futile as it has since been switched off.