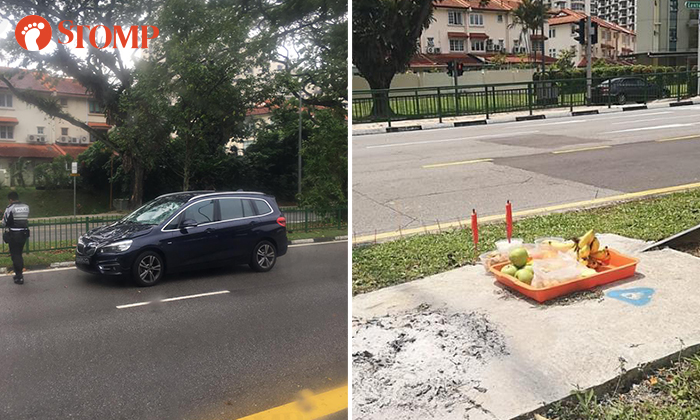 A 30-year-old woman who died after an accident along Lentor Avenue on Tuesday morning (Nov 5) had pushed a two-year-old boy out of the way before getting hit by a car.

A Stomper alerted Stomp to the accident with photos and said: "I was on bus 857 going towards Yio Chu Kang when I saw the scene."

The 30-year-old woman, who's a domestic helper, was pushing the two-year-old boy in a stroller but managed to push him out of the way.

Responding to a Stomp query, the police said: "At 10.54am on Nov 5, the police were alerted to an accident involving a car and two pedestrians along Lentor Avenue towards Ang Mo Kio Avenue 6.

"One of the pedestrians, a 30-year-old woman was unconscious when conveyed to Khoo Teck Puat Hospital where she subsequently succumbed to her injuries.

"Another pedestrian, a two-year-old boy, was conveyed conscious to Khoo Teck Puat Hospital.

"The driver, a 44-year-old man, was subsequently arrested for careless driving causing death

According to Lianhe Zaobao, it was raining when the accident occurred.

Reporters who visited the scene of the accident on Wednesday morning (Nov 6) saw prayer offerings placed on a grass patch by the road.

55-year-old bus captain Ms Tan said she saw the car's windshield had shattered and the front of the car was wrecked.