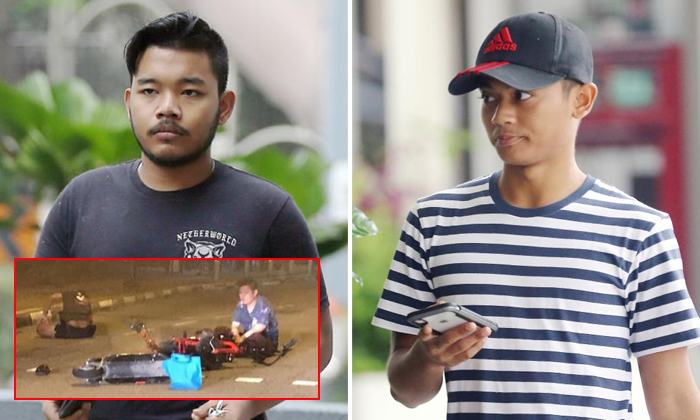 Two teens who ran a red light while riding their e-scooters on the road, resulting in a collision with another user, were sentenced to probation on Tuesday (Nov 5).

Muhammad Raziq Mohamad, 19, was sentenced to 18 months' probation, where he will undergo three months' intensive probation and 15 months' supervised probation.

He will also be placed under an Electronic Monitoring Scheme for a period of six months or until national service enlistment, whichever is earlier.

Under the conditions of the probation orders, both teens are required to stay indoors from 10pm to 6am. Raziq must perform 150 hours of community service, while Erzan will have to do so for 100 hours.

Both teens' parents were also bonded for $5,000 each to ensure their good behaviour.

The pair had been riding their e-scooters along Pasir Ris Drive 1 towards Loyang Avenue at about 8.20pm on March 16 from their respective homes to play sepak takraw.

Raziq was travelling along the left lane of the two-lane road, when he approached a pedestrian crossing, controlled by a traffic light, near Block 516 Pasir Ris Street 52.

When he was about five car-lengths from the crossing, Raziq noticed that the traffic light was red but did not slow down or stop his e-scooter. Instead, he continued riding the device across the pedestrian crossing at a speed of about 30kmh.

At the same time, the victim Cheah Thie How, 28, was also riding his e-scooter across the same pedestrian crossing while the green man was in his favour.

At this point, the traffic light had already been showing red for over 25 seconds, said Deputy Public Prosecutor Sarah Ong.

Raziq's e-scooter then collided into Mr Cheah's e-scooter, causing the latter to be flung to the ground.

Erzan, who was incidentally travelling a short distance behind Raziq, was also travelling at a speed of about 30kmh and did not slow down or stop at the traffic light crossing despite it showing red.

Erzan ran the red light, saw the collision, and did not stop to render any assistance.

The incident was witnessed by a driver, Mr Jason Chua Chang Han, 36, whose car had stopped at the pedestrian crossing when the collision took place. It was captured by his in-car camera.

After the collision, Raziq checked on the damage to his e-scooter, then left the scene without sharing his particulars with Mr Cheah. He met Erzan and his girlfriend at a nearby Housing Board block.

Mr Chua then located Raziq and told him not to run away and that he had video footage of the incident, but the trio of teenagers fled the scene.

The next day at about 6pm, Raziq presented himself at Hougang Neighbourhood Police Centre and told the police about his involvement in the collision. He added that Erzan had been present at the incident.

Meanwhile, Mr Cheah was conveyed to Sengkang General Hospital by an ambulance. He suffered bruises on his shoulder, chest and legs, as well as a fractured toe.

He was given 14 days of hospitalisation leave and light duty from March 30 to May 10, and his medical bills amounted to nearly $2,200.