Car overturns in accident with taxi at Robinson Road, cabby taken to hospital 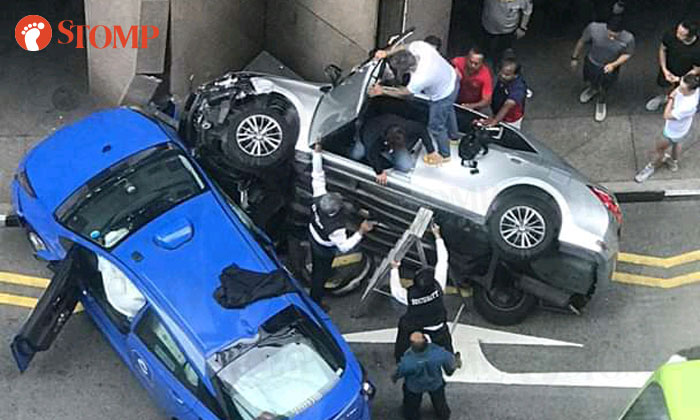 A 62-year-old cabby was taken to hospital after he was involved in an accident with a car along Robinson Road on Wednesday morning (Nov 6).

Stompers alerted Stomp to the accident and shared photos that were taken at the scene.

The collision caused the vehicles to ram into a building and the car to flip onto its side. Tiles on the building's outer wall are dislodged.

A man is seen climbing out of the car as security officers stand by with a ladder.

The accident blocked the lane for vehicles turning right onto Collyer Quay, causing a jam.

In response to a Stomp query, the police said they were alerted to the accident at about 10.05am.

The taxi driver, a 62-year-old man, was conscious when taken to Singapore General Hospital, a police spokesman said.

Ms Tammy Tan, Group Chief Corporate Communications Officer of ComfortDelGro told Stomp: "We are in touch with the passenger of the third party vehicle and our cabby.

"We are relieved that there was no passenger on board our taxi at the time of the incident.

"We are currently investigating the incident and will also assist the police in their investigation."