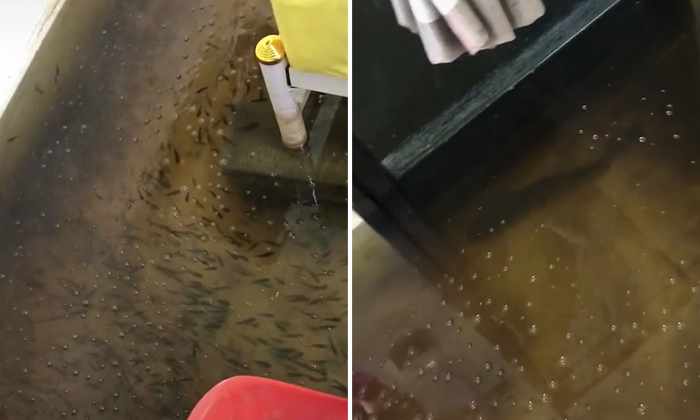 A woman in Thailand had a rude shock when she woke up and realised that she had not been sleeping alone.

The woman, who lives in Pathum Thani's Nakhon Chai Si district, not only found her bedroom flooded, but also discovered fishes swimming in the water.

A video uploaded by TikTok user lookpud935 shows the woman standing on a red chair as fishes swam around her.

The 39-second clip has since garnered over 1.2 million views and more than 4,000 comments.

According to the woman, recent floods in the area had brought the school of young northern snakehead into her room.

The northern snakehead is a species of snakehead fish native to China, Russia and Korea. It is known to be aggressive, carnivorous and fast-growing.

Due to its unusual respiratory system, the fish can breathe and live outside of water for several days. It also has the ability to wriggle its way to other bodies of water and survive being transported by humans.

"Juveniles can also wriggle their long, narrow bodies onto land, enabling them to travel from one pond or stream to another if needed," according to National Geographic.

Persistent rain during the monsoon season has caused devastating floods to submerge large areas across Thailand.

An estimated 1.3 million people have been affected by the flooding, said online reports.

She added: "Thai people are resilient, however this is the first time they are adapting to two major crises at the same time."