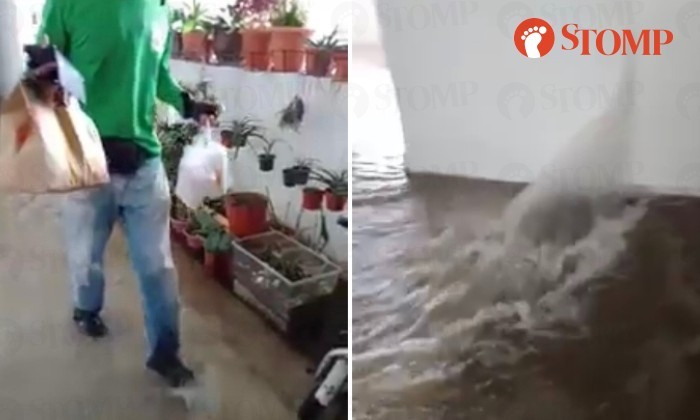 The residents living on the seventh floor of Block 185A Woodlands Street 13 experienced ankle-deep floods along the corridor after water gushed out from the wet riser on Sunday (Nov 1).

Stomper Watson came across a video of the flooded corridor and sent it to Stomp.

In the video, a GrabFood deliveryman can be seen wading through the water to make his delivery.

The deliveryman and the woman behind the camera can be heard greeting each other and laughing about the situation.

The video then pans to the ground, and the corridor can be seen completely flooded with water.

The video also shows water gushing out of the wet riser.

In response to a Stomp query, a spokesman for Marsiling-Yew Tee Town Council said they were notified by their conservancy team on Sunday (Nov 1) at 4.03pm that water was gushing out from the wet riser room at level 7 of Block 185A Woodlands Street 13.

"The town council immediately informed our fire protection tradesman to attend to the issue and alerted the Essential Maintenance Service Unit (EMSU)," added the spokesman.

"Our conservancy cleaners were also mobilised immediately to the affected area to clear the water from the common corridor area.

"The tradesman arrived on-site at 4.30pm and managed to stop the water flow by temporarily turning off the valve.

"Further investigation revealed that the pump feed endpoint's joint gasket of the wet riser gave way which resulted in the water gushing out."

The spokesman stated that the defective gasket has since been replaced on Monday (Nov 2).

He added that from the town council also visited the affected residents on the same day to assist them with the documentation of damages sustained to their personal belongings, such as carpets and food items.