Woman dies, man rescued from toilet after fire breaks out in AMK flat with "heaps of items" 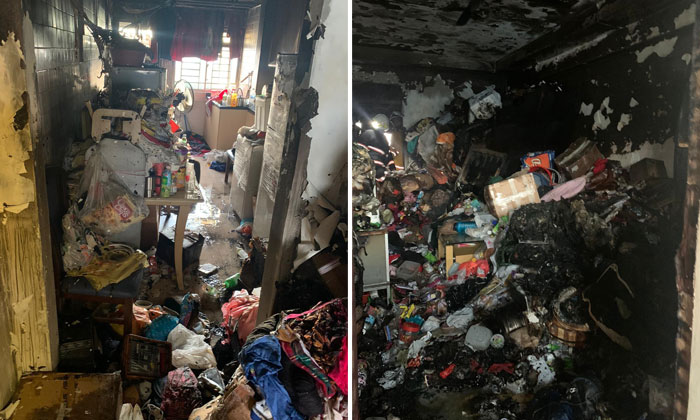 According to The Straits Times, the 48-year-old woman has died from her injuries.

The man, who was trapped in the kitchen toilet, was rescued by firefighters and the woman, who was found unconscious in a bedroom, was brought out to safety. She had no pulse and was not breathing so SCDF responders performed CPR on her.

Both casualties were taken to Tan Tock Seng Hospital.

The Singapore Civil Defence Force (SCDF) said in a statement on Facebook they were alerted to a fire in the 11th-floor unit at 6.10am.

About 30 persons from the affected block self-evacuated prior to SCDF’s arrival.

Firefighters wearing breathing apparatus sets had to conduct forced entry to gain access into the unit.

"The fire had engulfed the living room due to the vast accumulation of combustible items within it," SCDF said.

"Firefighters' movement within the unit was severely impeded as they had to carefully manoeuvre over the heaps of items to conduct firefighting operations."

The fire was extinguished with one water jet and one compressed air foam backpack.

"Residents are urged not to accumulate combustible items such as newspapers, furniture, and clothes within their units as these can fuel a fire causing serious damage and may even be life-threatening."