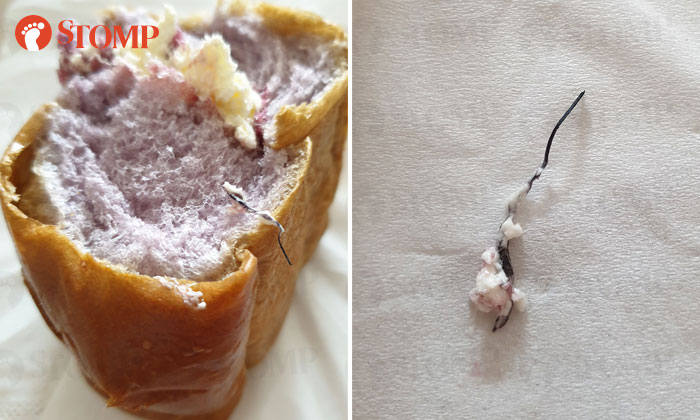 Stomper Sarah was shocked to find a foreign object in bread she bought from a bakery in Tampines while she was feeding her young children.

She told Stomp she had bought a packet of bread from DJ Bakery at Tampines Street 81 on Friday (May 10) and fed it to her two-year-old and five-year-old the next morning (May 11).

"I discovered this black thing in the bread," she said.

"A first I thought it was blueberry filling but when I took a closer look, I realised it was a stiff black thread or wire.

"I can't imagine if my kids accidentally ate it.

"It's a choking hazard and so unhygienic.

"Luckily, I have a habit of feeding my kids because my husband would usually just let them eat by themselves."

Sarah said she alerted the bakery to the incident and was told that they would issue her a refund if she went back to the outlet.

However, because she lives in Sengkang, she declined the offer. She bought the bread on Friday because she happened to be in Tampines for a paediatrician appointment.

"I just wanted to alert them to this so they are aware."

Stomp has reached out to DJ Bakery for comment.