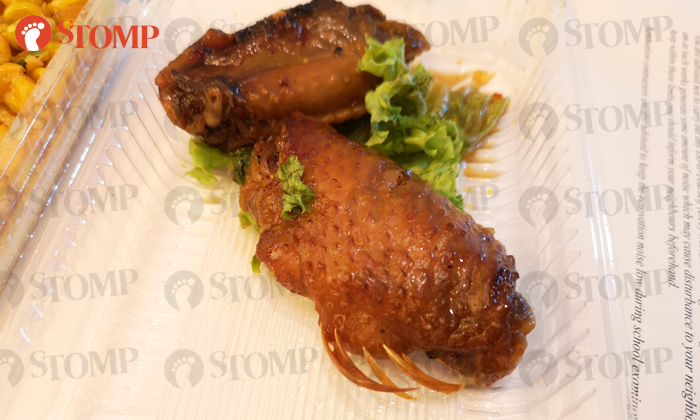 Stomper J was disgusted when she found feathers on a chicken wing that she had ordered from a Vietnamese restaurant on May 4.

The order was made via Foodpanda and came from Pho Street's Compass One outlet.

J was digging into the Vietnamese fish sauce wings when she discovered feathers sticking out of one wing.

She told Stomp: "I felt disgusted and wondered how this could have even happened."

J, who said this is not the first time she has consumed food from the restaurant, ended up throwing the entire dish away.

She then notified Pho Street, Foodpanda and Stomp of the incident on the same day.

Responding to a Stomp query, a spokesman for Pho Street said: "The customer notified us via email of the situation on May 4 and our operations team wasted no time to contact her on May 6.

"Due to her busy schedule, our operations manager managed to speak with the customer on May 8 to personally apologise for the bad experience.

"We are in the process of refunding the customer for the dish and she has also graciously accepted our invitation to visit Pho Street again to give our cuisine another chance."

The spokesman told Stomp that a serious approach is being taken to the incident.

She added: "Since the feedback, we have tightened our operating procedures as well as retrained all chefs on the proper handling of all dishes.

"A stern warning has also been given to our supplier to provide good quality chicken wings."