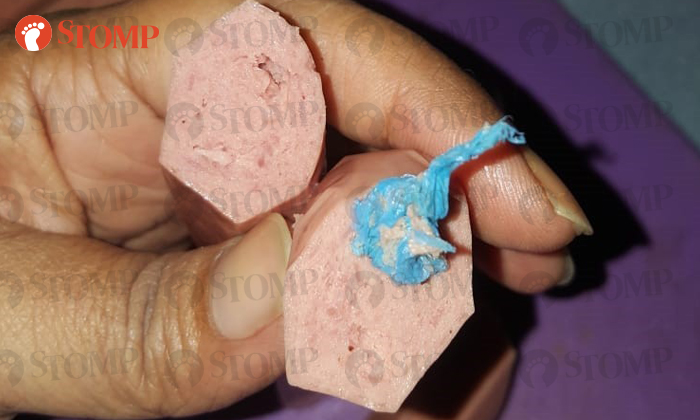 A piece of blue plastic wedged inside a chicken sausage that Stomper Inda purchased from Sheng Siong has been identified to be from protective equipment worn by the supplier's employees.

Inda told Stomp that she had purchased three packets of chicken franks from Sheng Siong's Junction 10 outlet on May 1, at around 7.30pm. The sausages were of the Royal brand.

She later opened two packets to prepare food for her children and found that one sausage, when cut open, had a piece of blue plastic embedded in it. 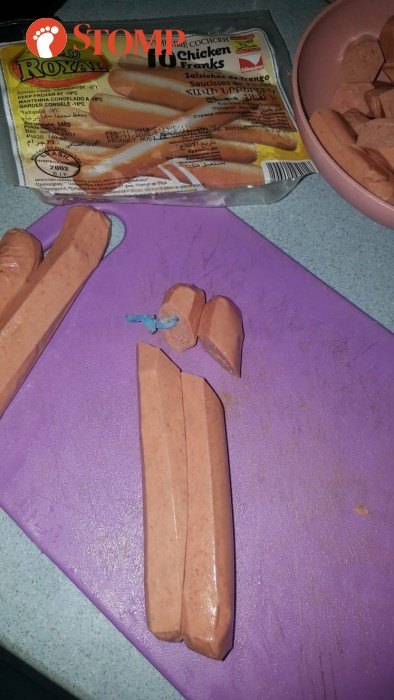 She told Stomp: "The material was similar to that of a plastic bag.

"Fortunately, I cut the sausage open and discovered the plastic, or else my children might have chewed and swallowed it without noticing."

Responding to queries, a Sheng Siong spokesman said that the batch of chicken sausages that was manufactured in February 2019 was immediately recalled following Stomp's alert.

The supplier has also been alerted.

The Sheng Siong spokesman told Stomp in a statement on Friday (May 10): "We have apologised to the customer for the incident and we are grateful that she has brought the incident to Stomp's knowledge. The customer has also handed the product to us.

"From the supplier’s investigations, the blue material came from the personal protective equipment that the employees wore.

"The supplier has since taken actions to step up on training and checks on the employees’ protective equipment.

"We will continue to work closely with the supplier to ensure quality standards."