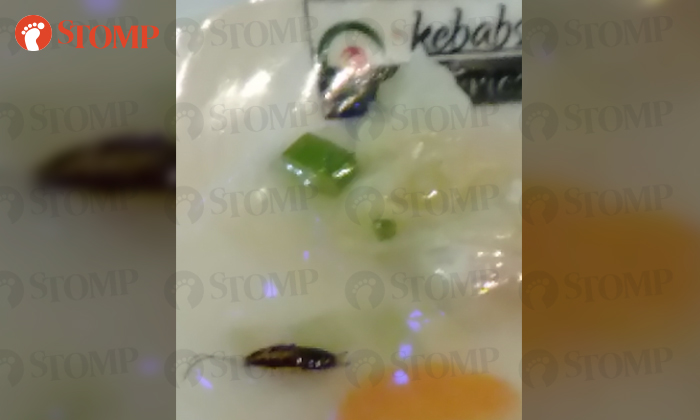 A family dinner for Stomper Mohamed was marred when he and his wife discovered what appeared to be a baby cockroach in their five-year-old daughter's soup.

Mohamed said they visited Kebabs N Curries at Mustafa Centre on April 28, at around 10.20pm.

He ordered chicken clear soup for his daughter and it was the first dish to be served.

Mohamed told Stomp: "My daughter said the soup was too hot after having a few spoonfuls, so my wife poured it into a small plate. That was when she found a small cockroach in the soup."

The cockroach was already dead.

Mohamed recounted: "I informed the restaurant's counter staff, who apologised and said I did not have to pay for my meal.

"I was not satisfied with how they were handling the issue, so I asked for their manager, who also apologised and offered to waive off my bill.

"However, I told them I did not want free food and that the issue here was about safety standards.

"They offered to replace the soup but we had no appetite after what happened."

Mohamed, who decided to cancel the rest of his order and paid for just the soup, said: "The restaurant said it was complimentary but I wanted to pay for what had already been consumed."

In response to a Stomp query, a spokesman for Kebabs N Curries said it sincerely apologised for the incident.

The spokesman added: "We clearly understand that it was not something which anybody would appreciate to find in their food.

"However, we do take utmost care when it comes to hygiene and cleanliness procedures, and perform pest control on a regular basis."