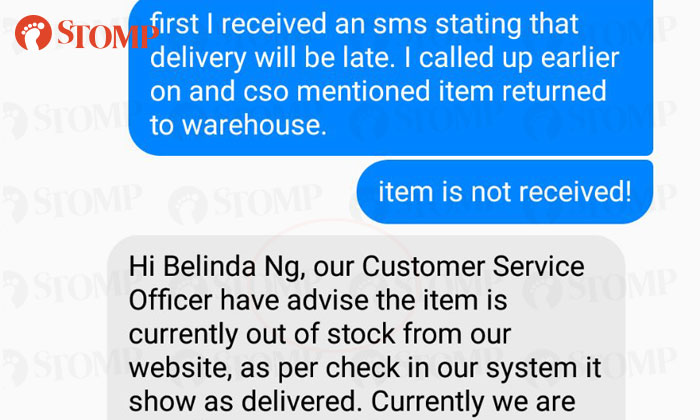 Stomper Belinda had ordered mooncakes from Redmart to be delivered on Sep 29 in time for the weekend but was sorely disappointed when they never arrived.

She told Stomp that the mooncakes were scheduled to be delivered yesterday between 8 to 10pm.

"I received an SMS from them stating that the delivery will be delayed until 10.45pm due to a delay in earlier deliveries," she said.

"I waited until 12 midnight. No one ever came."

Today (Sep 30), she called the company up and spoke to a customer service officer.

"The CSO mentioned that the item is out of stock and that since the item is perishable, they cannot do the delivery."

"I called and sent them messages through Facebook and all I got was a template reply and standard answer."

Now, Belinda said she has to find mooncakes elsewhere.

"I needed the mooncakes for the weekend and now I have got to purchase it outside with limited choices since almost everything is sold out.

"I am super disappointed."