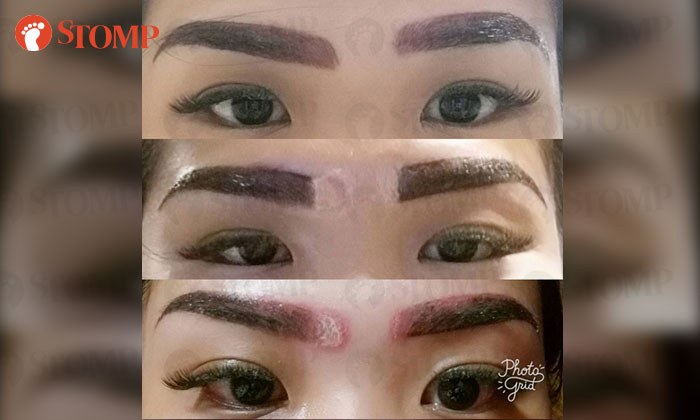 Stomper Valerie was horrified when her eyebrows were badly scarred following an eyebrow embroidery procedure she had done at a home-based salon at Telok Blangah on Aug 7.

Valerie had chanced upon the beautician's works on online marketplace Carousell and was impressed by her portfolio so she booked an appointment.

She added that the woman claimed to be very experienced and had certification from a beauty academy in Bangkok.

Before the procedure was carried out, the beautician traced out the design of the eyebrows for Valerie to approve.

"I was very satisfied and had high expectations," said Valerie.

However, after the whole process was over she was shocked at how different the end result turned out.

"The eyebrows were unbalanced and one was way longer than the other," she said.

Despite being unsatisfied with the result, Valerie was tired and her skin still felt tender from the treatment which is technically a form of tattooing that involves implanting dye beneath the surface of the skin using disposable needles.

When she reached home, she managed to take a closer look and was very upset and dissatisfied with how her eyebrows had turned out.

She immediately texted the beautician who promised to fix her eyebrows the next day.

Valerie found out that this involved applying beige dye over the part of her eyebrow that had extended too far towards the centre of her forehead.

"She told me to wait for one to two days to wait for the dye to peel off but it took a week.

"When it finally did, the skin around my eyebrows was very red and there was scarring on the inner part where she had applied the beige dye on top of the original dye."

She consulted other beauty technicians who advised her to use makeup remover to remove the dye before it set in.

However, the redness and scarring have still not gone away despite it being three weeks since she had the procedure done.

She contacted the beautician again to ask her to refund the $150 she had paid for the treatment but she refused and asked Valerie to come back so that she can "fix it" for her.

Valerie added that the beautician was defensive and said that Valerie had asked for longer eyebrows to which Valerie agreed but after the treatment, she was left with one eyebrow longer than the other.

The woman also told Valerie that she should have been more patient and waited for the beige dye to set in.

Valerie refused to go back as she no longer trusted the beautician to do a good job.

"Why would I go back to her to disfigure my face again?" she said.

Valerie told Stomp over the phone that she has tried eyebrow embroidery once before and she did not experience anything like this.

Now, she is still very conscious about her eyebrows and says she uses a lot of concealer to cover up the redness and scarring.

Valerie also posted her experience on her Facebook page leading to the beautician reaching out to her to offer a partial refund.

"She said she would give me $100 and not a full refund because according to her, I look pretty in my photos.

"What what she doesn't realise is I was using a lot of concealer and had to redraw my brows."

Related Stories
Thai woman with bone cancer disfigured by massive tumour on face
Thai doctors reverse damage to teen's disfigured face after teacher allegedly threw mug at her
Woman spends $12,000 on plastic surgery -- then gets disfigured by best friend because it 'made her look too pretty'
More About:
complaint
bad service
beauty
Carousell
disfigured