Why is Mr Postman cramming large packages into my letterbox? 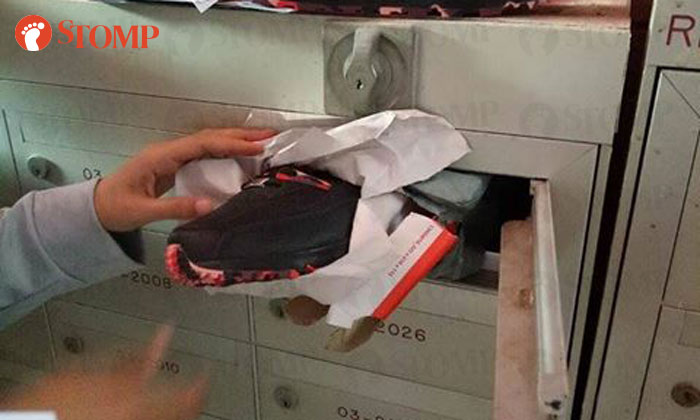 Stomper Iskandarmas was frustrated when he was unable to remove a package that had been stuffed into his mailbox by a postman.

He had bought a pair of shoes online and found the package in his mailbox last Friday (Sep 8).

The box had been crammed into the mailbox despite it being too big to fit in there.

Iskandarmas had to rip open the box in order to get the shoes.

According to the avid online shopper, this is not the first time this has happened to him.

"I regularly buy things online and some of my items end up damaged because they were stuffed into my mailbox," Iskandarmas told Stomp in a phone interview.

"I once received a cap that was damaged because it had been crumpled from being put in the mailbox. I could not get a refund from the seller."

The Stomper added that he did not understand why the postman did not just deliver the bulkier items to his doorstep.

"There is always someone at home so it should not be a problem," he said.

"This happens a lot and I cannot take it anymore."

In response to Stomp media queries, a SingPost spokesman issued the following response:

"The opening of a letterbox that residents access may sometimes be a little smaller than the aperture used by our postmen to deliver the mail.

"We have templates that our postmen can use to check if the packages they are delivering will fit in the letterbox.

"Packages that are too big are to be delivered to the doorstep of the addressee.

"In this case, the size of the package was misjudged.

"We have alerted the postman and the team to pay greater attention when delivering large packages to avoid recurrence.

"We apologise to Mr Iskandarmas for the inconvenience caused."