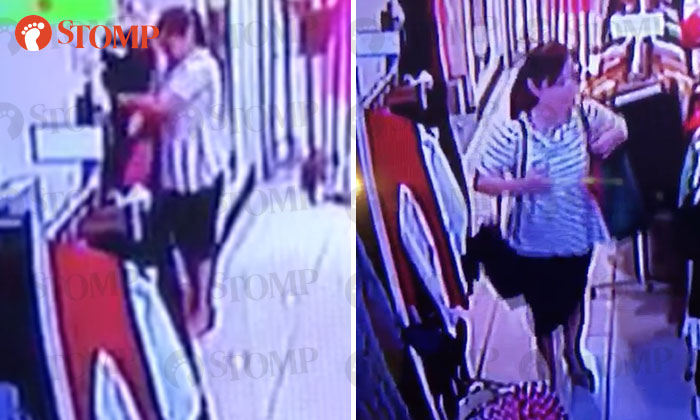 A woman was caught on closed-circuit television (CCTV) taking a dress from a rack at a clothing shop in The Arcade shopping centre, located along Raffles Place, on Tuesday (Dec 12) at 6.45pm.

Stomper K sent in video footage of the incident to Stomp.

In the video, the woman was seen browsing through some clothes on a rack, while a store attendant went to the back of the store.

The woman could be then be seen swiftly removing a dress from the rack and stuffing it into a large bag slung over her arm.

She then proceeded to grasp the bag tightly under her armpit.

According to K, her colleague, the store attendant in the video, had approached the woman to introduce some items but was asked for a dress of a larger size.

K’s colleague left to retrieve a dress from the storeroom at the back of the shop, and the woman quickly grabbed the dress off the rack, placing it in her bag.

When K’s colleague came back with the dress, the woman even tried it on in the fitting room, before telling her that it was too big, and she had to consult her ‘husband’ first, who she alleged was ‘just outside the store’.

She did not return.

Said K: "She grasped the bag tightly beneath her armpit so my colleague couldn't look inside.

"What’s scarier is that she even calmly tried on the dress that my colleague brought her, before coming up with an excuse to leave.

"The large bag that she brought with her was also used to hide her intentions.

"I hope that readers will be more aware of people like this woman after reading my story.

"Even if someone doesn't look suspicious, be aware, especially if they’re holding onto large bags."

Related Stories
Man caught on video taking woman's bra from outside Punggol unit
Man takes Samsung Galaxy S7 Edge from shop counter at Orchard Towers
Woman takes PS4 games at Hougang Mall -- but only pays up after video of her gets posted on FB
More About:
caught on camera
stealing
theft