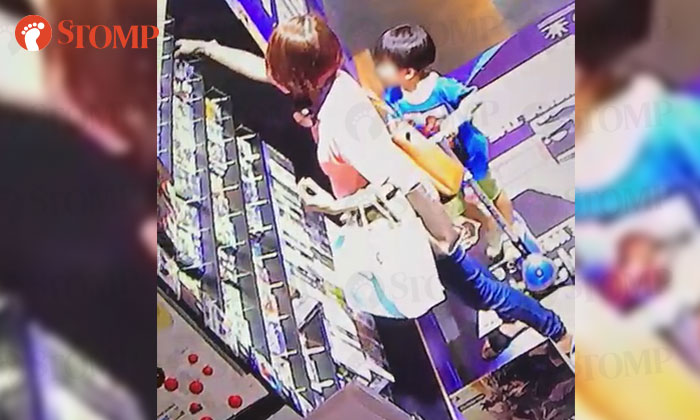 A woman was caught on video taking two PS4 games from a store at Hougang Mall and walking away without paying on Nov 16.

Stomper Hong, a friend of one of the store's owners, shared the video of the woman with Stomp.

In the video, the woman is browsing through the different games on the shelf before she takes one and slips it into her bag that is hanging on her left arm.

She continues to browse and pick up the game cases off the shelf before putting them back again until she does the same thing a second time. An anonymous source told Stomp that when the woman walked out of the shop, the alarms went off.

"The staff were busy attending to other customers and by the time they exited the store to follow the woman, they soon lost sight of her as she was walking very fast," the source said.

Hong and his friends posted the video of the woman to Facebook and called for netizens to help them identify the woman.

Somebody recognised her and shared her Facebook profile with them so they sent her a private message and told her to pay for the games within three days or they would make a report.

According to Hong, the woman transferred the money for the games, amounting to $132, on Nov 17 at midnight and added that since she had paid for the games, it was not considered stealing.

"I just want to warn others about this woman," said the Stomper.