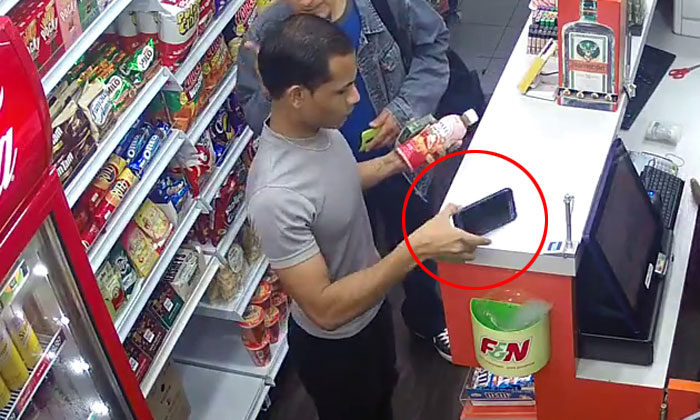 A man was caught on video taking someone else's phone that was left on a counter at a shop in Orchard Towers on Nov 25.

Facebook user Teague Bass, who says that the Samsung Galaxy S7 Edge is his, shared CCTV footage of the man taking his phone on his page.

In the video, the man is seen purchasing a drink and a box of cigarettes.

While the cashier is processing his order, he notices the phone on the counter.

After a while, he touches and taps the screen of the phone.

Eventually, he picks up the phone and leaves with it after the cashier asks him to make way for another customer.

In his post, Teague wrote that he has informed the police about the matter and is urging netizens to tell the man if he returns the phone to the shop, "no action will be taken".

In response to concerned questions from friends and followers, Teague explained that he had accidentally left his phone on the counter when he exited shop to talk to a friend.

He added that he is a regular at the store and often goes there on his breaks.

Related Stories
Woman takes PS4 games at Hougang Mall -- but only pays up after video of her gets posted on FB
Woman loses total of $1k after another shopper takes wallet that she left at Hougang Mall store
Man takes $18 wallet from store at Paya Lebar Square and walks away without paying
More About:
caught on camera
stealing
theft
phone
Orchard Towers