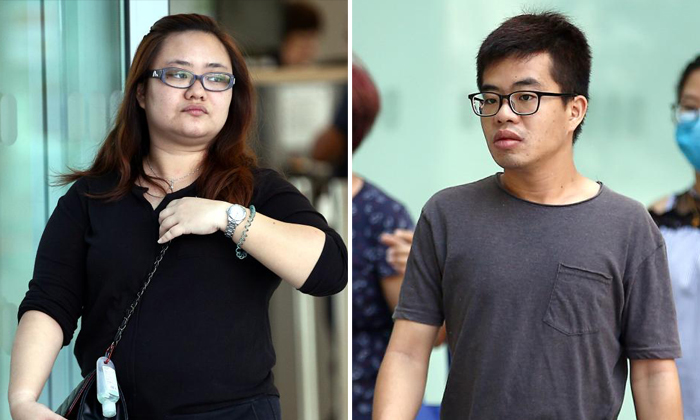 With her marriage in tatters after her husband found out about her extramarital affair, an administrative assistant conspired with her boyfriend to sabotage her spouse's car so that he would be killed in a traffic accident.

But an eyewitness on Jan 11, 2018, spotted Leong behaving suspiciously at a carpark where the vehicle was parked and alerted the police.

Officers, who arrived at the scene, arrested Leong and seized his items including his mobile phone. They nabbed Yeo a few hours later after they found text messages the lovers had exchanged on the device.

Leong and Yeo each pleaded guilty on Thursday (Feb 20) to working together and agreeing to cause grievous hurt to Mr Ting by performing a rash act.

The Straits Times understands that Leong and Yeo have since broken up. Yeo is also divorced from Mr Ting, 28, who worked as a private-hire car driver.

The court heard that she married Mr Ting in September 2011 and they have two children together. She later had an affair with the younger man and Mr Ting found out about it in June 2017. She also became pregnant with Leong's child, the court heard.

Deputy Public Prosecutor Houston Johannus said: "Walter wanted to divorce Amanda and they quarrelled frequently. Enraged by the acrimonious quarrels, she decided to kill Walter. She conspired with Leong to sabotage Walter's car so that he would get into an accident and die."

Yeo told her boyfriend to kill Mr Ting as his death would "settle all her problems".

To prove he was worthy of her love and to make her happy, Leong agreed.

On Jan 6, 2018, she told Leong to puncture Mr Ting's car tyres with some nails. As Leong did not have any nails, Yeo passed him some that were a few inches long.

In the wee hours the next day, Leong went to a multi-storey carpark near Mr Ting's Yung Kuang Road flat in Jurong. With Yeo's help, he found the car and used a pair of pliers to insert a nail into each of its left tyres.

DPP Johannus told the court: "On her instructions, he covered his face with a jacket. He also sent Amanda a photograph of a sabotaged tyre."

It is not clear if Mr Ting drove his car after this.

Yeo later found out that her husband had made plans for a road trip with their children and his parents on Jan 11, 2018. She told her boyfriend about it and hoped Mr Ting "would get into an accident and die".

She instructed Leong to loosen the wheel bolts of Mr Ting's car, which will be parked near his parents' flat, and cut the brake wires.

In the wee hours of Jan 11, 2018, Leong went to a multi-storey carpark near a Depot Road flat belonging to Mr Ting's parents, and tried but failed to loosen the wheel bolts.

After that, he used a wire cutter to cut the anti-braking system wire behind the front right tyre and sent Yeo a picture of the damage.

DPP Johannus said: "A complete cut of the (anti-braking system) wire will compromise the safety of the driver as the need to apply hard (or) emergency brake cannot be foreseen. The front right wheel of the motor car may lock, and this would pose a safety risk to the driver as he may lose control of the car."

An eyewitness later spotted Leong walking around suspiciously with a jacket draped over his head and he alerted the police. Officers arrived soon after and arrested the offender.

On Thursday, Leong and Yeo were each offered bail of $30,000 and they will be sentenced on March 11.

For committing the offence, they could each be sentenced to up to a year's jail and a maximum fine of $2,500.

Related Stories
Woman smashed bottle on teen's head after suspecting her of having affair with hubby, tried to stab her
Man camped outside hotel to catch wife having affair, clung onto her alleged lover's car for 7km
Mistress sued for $2m by businessman says his wife found out about money by bribing tenant
More About:
affair
couple
court