Man camped outside hotel to catch wife having affair, clung onto her alleged lover's car for 7km 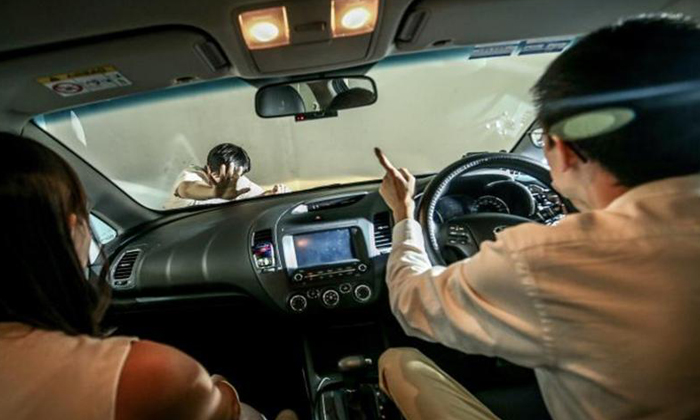 Suspecting his wife was having an affair, the husband camped outside a hotel in the hope of catching her with her lover.

When he saw them entering a car, the man demanded they alight.

But Desmond Koh Wee Boon drove off instead, and ended up driving for about half an hour, up to speeds of 70kmh, with the victim hanging onto his front windscreen for at least 7km.

Yesterday, Koh, 34, was sentenced to 11 weeks' jail and disqualified from driving for two years for one count of doing a rash act that endangered human life or the safety of others.

The court heard that on April 28, 2018, the victim, 27, and his friend managed to track down the victim's wife and camped outside Fragrance Hotel in Kovan.

After waiting for several hours, the man saw his wife entering the car with Koh at about 3am.

He banged on the windscreen and the driver's side door, demanding they alight.

But Koh drove off, and the victim clung to the driver's door and shouted for him to stop, but he continued to drive for about 40m down Sireh Place, before making a left turn into Kampong Sireh.

Deputy Public Prosecutor David Lee said: "The left turn caused the victim to be flung from the car and onto the road."

As the car stopped behind a vehicle, the victim climbed onto the bonnet of the vehicle.

"(He) then clung on to the top of the car's windscreen with his body stretched over the windscreen," added DPP Lee.

But Koh started driving again, for about 250m down to the Singtel building along Upper Serangoon Road.

At the building, the victim's wife alighted from the car and tried to persuade her husband to get down, but he refused.

At a red traffic light, a Grab driver and his passenger spotted the victim banging on the roof of the car.

The victim shouted for them to call the police, which they did.

Koh then drove back to Upper Serangoon Road, past Serangoon MRT and Nex shopping mall. 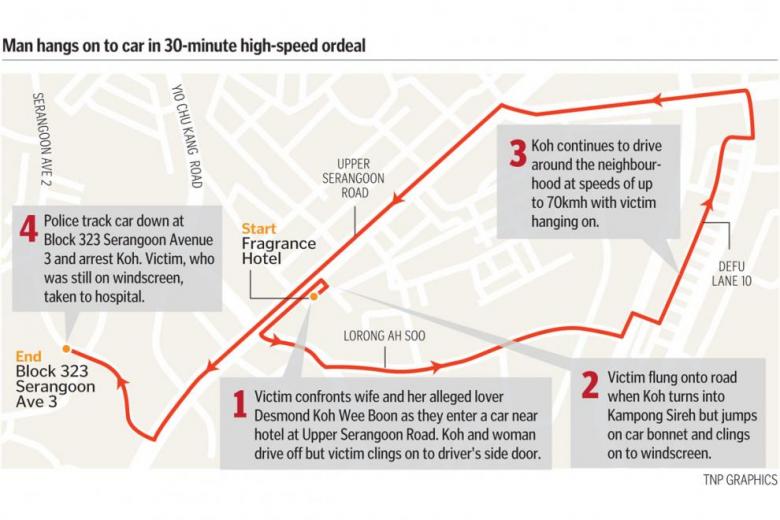 The police managed to track Koh down in front of Block 323 Serangoon Avenue 3.

Koh and the victim were later arrested.

The victim fainted due to hyperventilation while being detained, and had to be taken to hospital.

The Grab driver and his passenger said Koh had turned the car at high speeds, braked the car intermittently to throw the victim off, and had also beaten red traffic lights.

In mitigation, Koh's lawyer said the victim was the aggressor, and his client had feared for his own safety.

In response, DPP Lee said Koh had acted disproportionately to what he perceived as a threat from the victim, and had opportunities to stop the vehicle but did not do so.

He also added that Koh was convicted of a traffic offence in 2009 and for voluntarily causing hurt in 2014.

In sentencing, District Judge Christopher Goh noted that Koh had driven through some major roads, and the mitigating factors were not exceptional in this case.