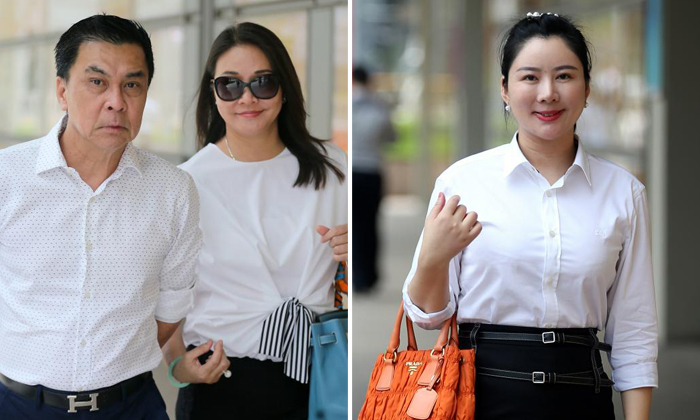 The woman who is being sued for $2 million by her former lover told the High Court on Monday (Sept 9) that the businessman's wife had bribed her tenant to get access to her bank book.

That was how the wife, Madam Chong Lee Yee, found out about the exact amounts of money that Mr Toh Eng Tiah, 55, had given her, said Ms Angelina Jiang, 33.

Ms Jiang was testifying on the fifth day of the hearing in Mr Toh's suit to get back $2 million he paid her between December 2016 and March 2017.

Mr Toh, who owns three recycling companies, says the money was a loan, while Ms Jiang says it was a gift.

Ms Jiang contends that Mr Toh had suggested they sign the agreement as a "ploy" to placate his wife, who had found out that he gave large sums of money to Ms Jiang.

According to her testimony, Mr Toh told her that his wife was making things difficult for him and he needed the agreement to show her that Ms Jiang genuinely loved him, and was not just after his money.

On Monday, Ms Jiang testified that Mr Toh told her that Madam Chong was collecting evidence of an extra-marital affair as the couple were undergoing a divorce, reported Shin Min Daily News.

Madam Chong then found out, with the help of one of Ms Jiang's tenants - known only as Anson - how much Mr Toh had paid Ms Jiang, she said.

Under the pretext of checking whether his rent has been transferred into Ms Jiang's bank account, Anson got the maid to show him her employer's bank book, she testified.

Ms Jiang said Anson then took photos of the pages of her bank book and showed the transaction details to Madam Chong.

Ms Jiang said she did not know this happened until Mr Toh and her maid told her about it.

Mr Toh's lawyer, Mr Anthony Lee, put it to Ms Jiang that she was making up the story, but she maintained that it was true.

The lawyer also produced photos of text messages that Madam Chong had taken off Mr Toh's phone. He pointed out that the messages contained promises to return the money to Mr Toh. But Ms Jiang denied sending these messages.