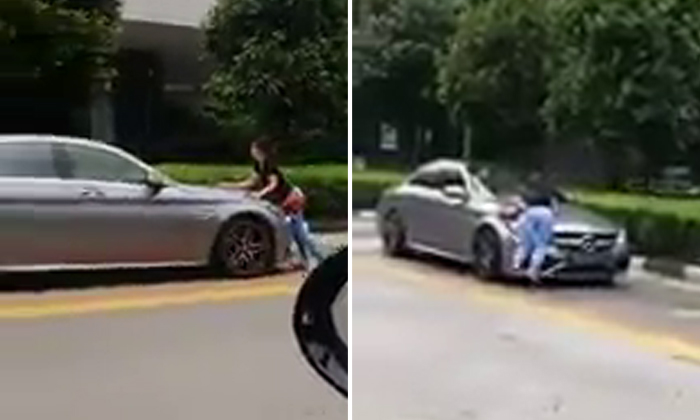 A woman was caught on camera trying to block a Mercedes that was travelling along Rochor Road in Bugis -- and then leaping onto its bonnet.

The incident occurred near Duo Tower on Friday (Jan 10), at around 4pm.

A witness, who wished to remain anonymous, told Stomp that he was travelling in a car as a passenger when he noticed the bizarre sight.

He then shared dashcam footage of the incident in a group chat with his friends. One of them subsequently uploaded the video on Facebook, where it went viral.

According to the witness, the Mercedes had stopped on the leftmost lane when a woman appeared and stood in front of the car.

In the video, the woman can be seen being undeterred by the moving car and thumping on its bonnet while walking backwards.

When the car still refused to stop, the woman leapt onto its bonnet and held on.

According to Shin Min Daily News, the Mercedes driver appeared to be in his 60s while the woman was in her 30s. They are believed to be acquainted.

After the video started circulating on social media, many netizens slammed the driver for his behaviour. They felt that he should not have continued driving regardless of what had happened between him and the woman.

One user said that the driver should have called the police instead of simply driving on.

However, a few netizens pointed out that the Mercedes driver had already slowed down in order to avoid hurting the woman.

Related Stories
Guy clearly hasn't gotten over S'pore's cool weather spell
Passers-by see tissue paper with dried blood in Toyota car -- then realise it's quite a 'pig' deal
Man sleeps in van for at least 9 hours after parking by roadside -- despite attempts to wake him
More About:
unusual
dispute
dangerous