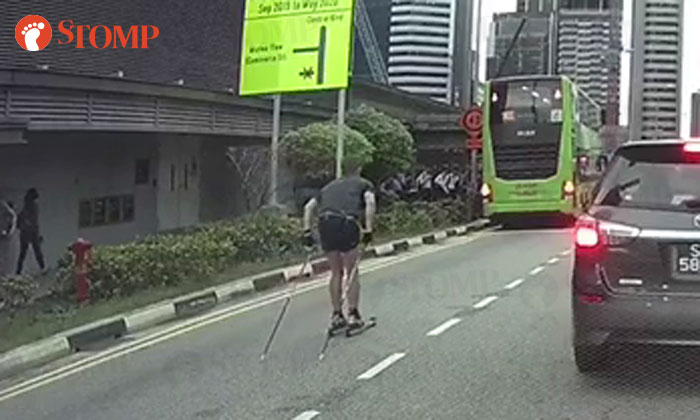 Singapore may still be experiencing "sweater weather" but it is not every day you see someone skiing on the streets here.

Stomper James was driving along Central Boulevard when he saw a "skier" travelling alongside vehicles on the road on Tuesday evening (Jan 7).

He shared with Stomp footage taken from his in-car camera of the unusual sight near Marina Bay Financial Centre.

"I was shocked but then thought it was amusing," he said.

"Maybe Singapore is the Switzerland of Asia indeed.

"Who said we need snow to ski?"

The man appeared to be roller skiing, which is an off-snow equivalent to cross-country skiing.

It is also similar to rollerblading but with the added help of poles to push one along.

The full-body workout was created as a summer training exercise for skiers but has become a competitive sport in its own right.

Related Stories
Passers-by see tissue paper with dried blood in Toyota car -- then realise it's quite a 'pig' deal
Singaporean woman's wedding with 'ang moh' husband at Clementi void deck is like no other
Sengkang resident's $500 tent removed from carpark by town council due to security concern
More About:
unusual
unusual sight