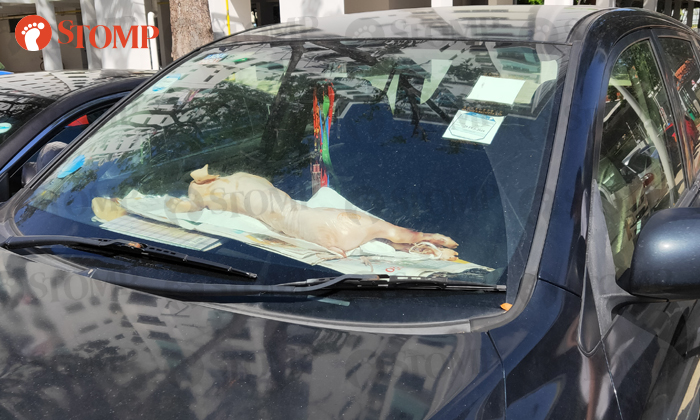 Chinese New Year came early for a Toyota driver who prepped his suckling pig by leaving it out to 'roast' on the dashboard of his car.

Stomper Pig Suntanning and her husband were on their way to visit her mother on Monday (Jan 6) at around 11am, when they noticed the car parked at Block 65 New Upper Changi Road.

Pig Suntanning told Stomp: "My husband first saw tissue paper with dried blood at the passenger's side of the car.

"When we passed by again later, my husband pointed it out to me so we went forward to take a look.

"We saw that someone was literally roasting their suckling Spanish piglet on their car's dashboard.

"Maybe this is just in time for Chinese New Year."

Photos submitted by the Stomper show the suckling pig lying on a bed of newspapers and tissue paper on the car dashboard.

Pig Suntanning added: "At first, we were disgusted. But later, we realised that it was quite funny.

"A passer-by who walked past and noticed that I was taking photos also had the same disgusted-yet-funny look on his face.

"When I showed my family the photos, they thought it was a puppy."

Related Stories
Commuter thought he saw a ghost on MRT train -- but it's just a cosplayer
Woman creates her own personal space on train -- with a hula hoop
Resident nearly calls police after thinking cabby fainted in taxi -- then realises he's just napping
More About:
funny
unusual
carpark