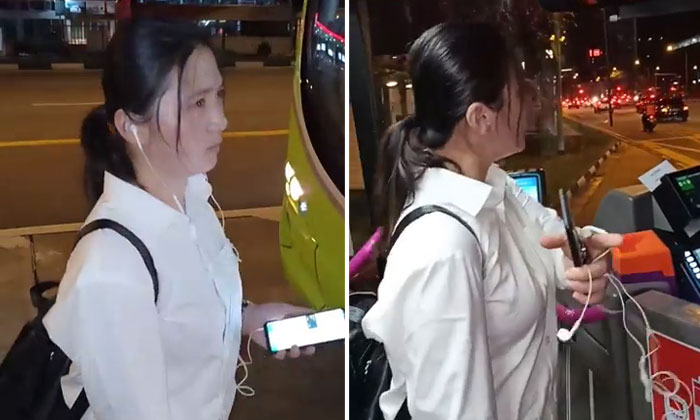 Passengers on board bus service 43 were delayed for about 20 minutes when a woman stood in front of the bus and demanded that the driver make a U-turn after she missed her stop.

Facebook user Pravin Kumar was one of the passengers on the bus heading towards Punggol when the incident happened in front of Tai Seng MRT Station on Saturday at about 11.30pm.

He took a video of the scene and posted it on Facebook where it has since garnered over 791,000 views.

Pravin told Stomp in a phone interview that he heard the woman kicking up a fuss from Paya Lebar but did not know what had agitated her.

Eventually, he found out from other passengers that she had missed her stop and wanted the driver to make a U-turn.

She later alighted the bus at Tai Seng and stood in front of the bus, preventing the driver from moving off.

She is heard repeatedly saying she wants to lodge a complaint against the driver while other passengers try to persuade her to get out of the way.

It seems like there was a miscommunication between her and the bus driver because she was not familiar with where she wanted to go.

"It was difficult trying to communicate with her since she could not speak English," said Pravin.

"I'm thankful to the couple who came and tried to help at the end even though they were waiting for a different bus.

"We were stuck there for 15 to 20 minutes until the woman finally got off the bus.

"I'm lucky I managed to catch my bus transfer in time despite this."

Go-Ahead Singapore, which operates bus service 43, told Stomp in response to a media query that it is aware of the incident.

A spokesman issued the following response:

"The bus captain, one who is experienced and familiar with the route of service 43, was approached by a commuter for directions to a destination and assisted accordingly.

"It is later understood that the original destination provided differed from where the commuter wanted to go.

"Our bus captains are equipped with extensive route knowledge of the services they drive and are trained to effectively manage different situations in a calm manner.

"Safety is of paramount importance in any circumstance and once it was established in this case, the affected service continued its trip to completion."